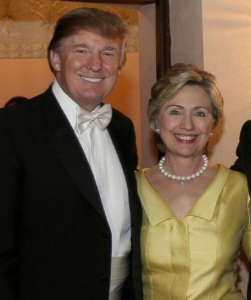 Hillary Clinton retains a one point lead over Donald Trump in the Keystone State.

That’s the finding of the latest Quinnipiac Poll, which has the same margin as their survey from May.

Clinton receives 42% of the vote in a two-way contest with Trump while the GOP nominee gets 41%. The Democratic nominee could probably use the endorsement of her former rival Bernie Sanders, though, as he came out with a 47-40 advantage over Trump.

Quinnipiac also included Libertarian nominee Gary Johnson and Green Party nominee Jill Stein in a separate question. When these two were included Clinton got 39% and Trump 36%. Johnson and Stein took 9% and 6% respectively.

The gender gap in this poll is thirty-three points, which is down a bit from the forty point difference last month.

The reason Johnson and Stein do so well for third-party candidates is likely because Hillary and Donald aren’t particularly well liked.

Just 41% have a favorable opinion of Clinton (22% strongly, 19% somewhat) while 56% have an unfavorable view (48% strongly, 8% somewhat). The silver lining is that at least now voters have a better opinion of her than they do of her opponent.

The Democratic nominee has the edge on most of the issues. By a 55% to 34% margin, voters think she’ll make the right decisions regarding nuclear weapons. She also leads 54% to 38% when it comes to who would do better in an international crisis.

PA voters favor Clinton 51% to 44% on immigration. She also edges out her opponent 47% to 45% when it comes to sending troops overseas and getting things done in Washington.

Trump is ahead in two categories. By a 52% to 39% margin, voters think he’s better able to create jobs. He is also ahead, 51% to 42%, when it comes to who would do a better job against ISIS.

Respondents were also asked questions about the candidate’s personalities.

Trump was considered more inspiring (45/41) as well as more honest and trustworthy (44/40). He also just edged out his opponent on the question of who is a stronger leader (47/46).

On the other hand, by a 59% to 32% margin, Pennsylvanians believe Clinton is better prepared to be President. She also has a 47% to 37% lead when it comes to who has the higher moral standards. Clinton holds a massive 54% to 33% advantage when voters are asked who is more intelligent.

Meanwhile, people would rather watch Trump on TV for the next four years (46/42) and would rather invite him to a backyard barbeque (52/36).

45% would want Hillary Clinton to come to their aid during a personal crisis against 44% who’d prefer Trump.

The Wall and Wall Street

Finally, Quinnipiac asked if Trump’s assertion that the American-born judge in his Trump University case was biased against him because of his Mexican heritage was racist.

By a 58% to 36% margin, respondents found the statement racist. This extended to every demographic except Republicans.

“In the Clinton-Trump acid test, Pennsylvania voters say Hillary Clinton is smarter, more morally grounded and better equipped to handle the ‘what ifs,’ the use of nuclear weapons and the management of an international crisis,” said Tim Malloy, assistant Director of the Quinnipiac University Poll. “Sure Trump would be more fun at a barbecue and might crush ISIS more efficiently, but given it’s a tossup on leadership, in the broad overview, Trump comes up short.”

These results caused quite a bit of confusion among political observers. For instance, Clinton’s lead against Trump nationally has been steadily increasing in the last few weeks. In these Quinnipiac polls, however, Clinton had just a one-point lead in PA and there was a tie in Ohio. In Florida, however, Clinton leads by eight.

These results don’t really make sense. A Democrat hasn’t recorded a higher share of the vote in Florida than in Ohio since 2000. You have to go all the way back to 1976 and Georgia native Jimmy Carter to find a Democrat who did better in Florida than Pennsylvania.

Some have also pointed to the demographic makeup of Quinnipiac’s polls.

Quinnipiac’s survey was also in the field for eleven days, which is an unusually long period of time.

Additionally, as we’ve discussed before, the results expose a rift between how pundits and campaign officials view Pennsylvania.

New Q Poll: Clinton up 42%-41% in PA. Yet sources close to her camp contend it's "not a battleground." Amazing. https://t.co/T2NMIFmhNm