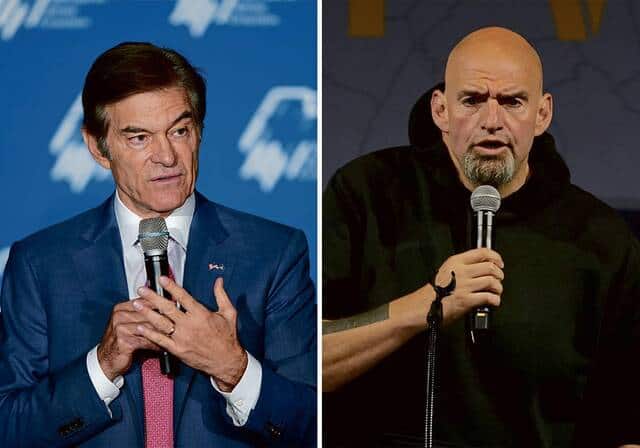 Good Thursday Morning Keystone State. It’s National Coffee Day.  And our best wishes for all those in the path of Ian.

Pennsylvania has never been known for nominating and electing candidates with pizzazz.

The 2022 Midterm Elections Are Already Here. “The calendar may still say September, but voting in the 2022 midterm elections is already underway in several states.” (Roll Call)

Scaring Voters to the Polls. How Political Ads Use Crime Statistics to Try to Sway Voters. “These types of ads, said Dan Gardner, author of the book “Risk: The Science And Politics Of Fear,” are “very deliberately designed to increase the feeling of a lack of safety. They want you to be afraid because that’s effective.” (Politifact)

“One race is getting tighter while the other has shown separation.

Those are the takeaways from the latest Franklin & Marshall College poll that shows Democrats John Fetterman and Josh Shapiro still in front in their respective races.” (PoliticsPA)

Notes On The State of Politics. “With just under 6 weeks to go until Election Day 2022, Democrats’ prospects of holding 2 Great Lakes region governorships are improving. We are moving the contests in Michigan and Pennsylvania from Leans Democratic to Likely Democratic — both races feature proven Democratic candidates running against controversial and underfunded Republicans.” (UVA | Center For Politics)

“Month after month, Pennsylvanians cite their safety and related topics — crime, guns, drugs, and violence — as one of the top problems facing the commonwealth.

These concerns have colored this year’s governor’s race, in which candidates have discussed curbing violent crime and fighting inequities based in the justice system.” (Spotlight PA)

Doug Mastriano Has Been Consistent About His Abortion Views For Years. “Republican state Sen. Doug Mastriano, the GOP candidate for governor, didn’t answer Wednesday whether he still believes women should face murder charges if they obtain an abortion that is prohibited by state law.” (WESA)

PA House Preview: Capital Region. “We continue our series on the candidates for the Pennsylvania State House with a look at the Capital Region of the Keystone State.” (PoliticsPA)

SD14: Where Dean Browning and Nick Miller Stand On Inflation, Abortion, Crime and More. “About eight months after a new Senate district was created for the Lehigh Valley, the two candidates, Republican Dean Browning and Democrat Nick Miller, will come face to face in a debate Thursday night.” (The Morning Call)

Jeffrey Yass: The Billionaire Behind Pennsylvania’s Right-Wing Machine. “Pennsylvania has a thriving network of right-wing organizations with power and sway over the state government. In recent years, a lesser known billionaire has started to stand out for his outsized influence over the Pennsylvania right-wing movement: Jeffrey Yass.” (Eyes On The Ties)

DA Krasner To Fight Impeachment Effort at Today’s PA House Hearing in Philly. “Pennsylvania House Republicans will hold a hearing today over what they say is Philadelphia District Attorney Larry Krasner’s “willful refusal” to tackle what they say is “unchecked violent crime” in the city.” (WHYY)

Republicans Have Nominated Jim Hasher and Drew Murray For At-Large City Council Special Election. “Both men acknowledged the city’s heavily Democratic electorate, but said they think they have a chance to peel away Democratic votes: “We’re underdogs, but we’re going into this election to win it.” (Philadelphia Inquirer)