The Curious Case Of Candace Quinn 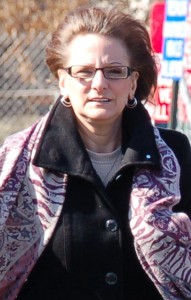 The ongoing investigation of Bucks County employees (and Republican campaign volunteers) couldn’t have come at a more interesting time.

While Republicans are emphasizing the county’s relative economic success, Democrats are talking about a steady stream of ethical problems in the courthouse.

The Democratic Commissioner candidates, incumbent Diane Marseglia and Doylestown Borough Council President Det Ansinn, have made the alleged “culture of corruption” a top campaign issue in the bellwether county.

Their campaign pounced on the news that Quinn had plead guilty, and sought to tie one of their opponent, Commissioner Charley Martin, into the case. Back in May – after she was indicted –  Martin green-lighted a secret separation agreement provided Quinn generous severance benefits. It also stated the County, “does not believe that Quinn engaged in any willful misconduct.”

She said even if Reilly’s office was independent, the Bucks GOP offices were shared.

“Given the grand jury’s presentment, and the testimony on who knew what, Charley Martin either wants us to believe he’s ignorant or complicit,” said Marseglia. “He’s either telling us that he had no idea that his Republican friends were walking across the street to put in hours of political work during the work day, or he’s telling us that he just didn’t care.”

“Any suggestion that this is some sort of systemic problem is just not accurate,” he told PoliticsPA.

Attempting to prove that the system works, Cawley explained, “This case was brought to light by Republican county controller, Raymond McHugh, who turned over information to the Republican district attorney, Dave Heckler, who decided to impanel a grand jury to investigate this.” He stressed that Republicans are willing to pursue any investigation, no matter where it leads.

Nonetheless, Marseglia and Ansinn are pushing the issue. They, along with the Democratic row office candidates, held a media event at the courthouse on Tuesday where they signed a five-point ethics pledge. They piled the criticism on Martin.

“After 16 years, how can Charley Martin be trusted to uphold a high ethical standard, when he has quietly stood by while his Republican friends have perpetrated scandal after scandal?” Marseglia said in a press release about the event.

We, the Democratic candidates for commissioner and for the row offices of Bucks County, pledge to:

Amid these grand jury investigations of their office last year, Quinn and Reilly began shredding as many documents as possible to cover up evidence of the illegal treatment of employees in the office and misuse of tax dollars. Among other things, the Bucks County Grand Jury determined that Reilly, Rebecca Keifer, and Candace Quinn forced office employees to perform political tasks, such as working on Republican political campaigns, using compensatory time so they would be paid with tax dollars.

“Every employee who testified in this case felt that they didn’t have a choice,” Deputy District Attorney Robin Twombly told the Intelligencer. “They were berated. They were yelled at. It got so bad that some of them had to quit. And it wasn’t just for Barbara Reilly’s campaigns. It was for other Republican candidates.”

Quinn has agreed to testify against her co-defendants, Barbara Reilly, Rebecca Kiefer who was Reilly’s second deputy until she resigned in August, and James McCullen, Reilly’s first deputy.

“Not only is this an issue because of the culture of corruption perpetrated by the Republicans, but also because Commissioner Charley Martin ran on the same ticket with the Register of Wills four times. Charley Martin was a direct beneficiary of these illegal political activities,” Ansinn said.

Bucks County District Attorney Dave Heckler, a Republican, said he isn’t concerned about the political ramifications of the investigation. He is also not worried about Marseglia’s public criticism of the scandal. Heckler insisted that politics don’t factor into how his office handles the case, and that he has no control over whether the remaining defendants will be tried before or after the election. However, he does have a lot of faith in the voters of Bucks County.