The History of PA Society – A Timeline 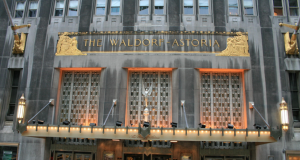 In honor of this weekend’s Pennsylvania Society extravaganza, we’ve compiled a timeline of some of the most memorable moments in the event’s history.

You can look at our schedule for the 2015 weekend here. The timeline is presented below:

1899 – Historian James Barr Ferree invited 55 fellow Pennsylvania natives to a dinner at the Waldorf-Astoria Hotel. While eating, the group christens themselves “The Pennsylvania Society of New York”.

1900 – The entertaining stories of a young Winston Churchill convince the members to henceforth have a guest speaker. Churchill had just finished his service in the Boer War.

1903 – The group is officially incorporated and shortens its name to “The Pennsylvania Society”.

1909 – Horace Howard Furness, a famous Shakespearean scholar, is given the first-ever Gold Medal Award. The honor would become a sporadic tradition until it was given yearly beginning in 1950.

1909 – Legendary steel magnate Andrew Carnegie becomes President of the PA Society. He serves a year and receives the second-ever Gold Medal in 1911. His wife is also awarded the medal in 1934.

1918 – Charles M. Schwab, a Carnegie protege and eventual business titan in his own right, becomes President. He would serve as President of PA Society until 1936 and won the Gold Medal in 1921.

1929 – The Gold Medal is given to famed industrialist Henry Ford.

1944 – General George C. Marshall wins the Gold Medal. Delivering his acceptance speech in the midst of WWII, Marshall touched on his Pennsylvania roots, discussed the shift to the Pacific theatre and mentioned the needs of peoples freed from the Axis powers (early foreshadowing of the Marshall Plan).

1947 – General Dwight D. Eisenhower is awarded the Gold Medal. The then-Chief of Staff of the Army was the second of three Presidents to be given the prize and the only one to win it before being elected.

1964 – FBI Director J. Edgar Hoover is the annual Gold Medal recipient. In his speech, he warns of extremists taking over the civil rights movement. Hoover urged the nation to be on alert to those “who would shortcut the orderly processes of government and demand a mantle of special privilege under the law.”

1968 – William Scranton is the first Governor of Pennsylvania to receive the Gold Medal.

1968 – Fresh off his work for the Nixon campaign, Roger Ailes meets Howard Butcher IV. Ailes convinced Butcher and others to secure funding for REA Productions, his first television production company.

1988 – Dick Thornburgh becomes the second PA Governor to get the Gold Medal.

1992 – Comedian and Philadelphia native Bill Cosby is given the Gold Medal Award.

1995 – George Leader is the third Governor of Pennsylvania, and the first Democrat, to get the Gold Medal.

2004 – The Gold Medal is given to former Governor Tom Ridge, the fourth ex-leader of Pennsylvania to win the honor.

2011 – Infamous political operative Roger Stone starts an impulsive campaign to get Arlen Specter to run for Mayor of Philadelphia.

2012 – M. Night Shyamalan gets the Gold Medal, the first member of the entertainment industry to win the award. Unfortunately, there was no twist ending.

2013 – Attorney General Kathleen Kane captures the buzz by revealing she is seriously considering a Senate campaign in 2016.

2013 – Joe Biden becomes the second sitting Vice President, and the highest-serving Democratic official, to be given the Gold Medal.

2014 – Attorney General Kathleen Kane, amidst the swirl of scandal, announces she will be running for re-election in 2016 instead.