Anti-Corbett ads began running in late May and early June. The “Wide Open” ad aired second, but both promoted a similar theme – accusing Corbett of “making things harder” for the middle and working classes. 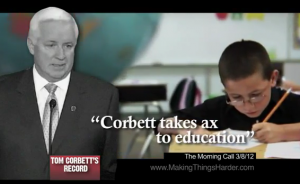 The ads are back, according to the PG.

The Post-Gazette’s Tim McNulty has the story:

American Working Families has bought time to replay its initial ad (called “Making Things Harder”) over the next 10 days. Asked about the buy, spokesman Bud Jackson said in an email that “Our effort is a long term strategy that will go beyond November.”

UPDATE: In response Corbett spokesman Kevin Harley pointed (as he has in the past) to Jackson’s working relationship with the House Democratic Campaign Committee:

“Once again, the favorite political consultant of convicted felons Bill DeWeese and Mike Veon is back to throw more mud. Bud Jackson won’t say who’s paying for these ambush attacks, but he certainly keeps some interesting company.”

Update: Jackson fired back at the Guv, noting that he too has ties with a politico who’s had run-ins with the law: RNC committeeman Bob Asher, who in 1986 was convicted of bribery, conspiracy, perjury and racketeering.

“Tom Corbett is silly enough to try to associate me with Bill DeWeese and Mike Veon whom I either broke ties with or whose problems I had nothing to do with,” he said.

“Pennsylvania people will now be surprised to know that Tom Corbett has taken millions of dollars from a convicted felon who is one of his right-hand men. Clearly, he says one thing and does another if the price is right.” 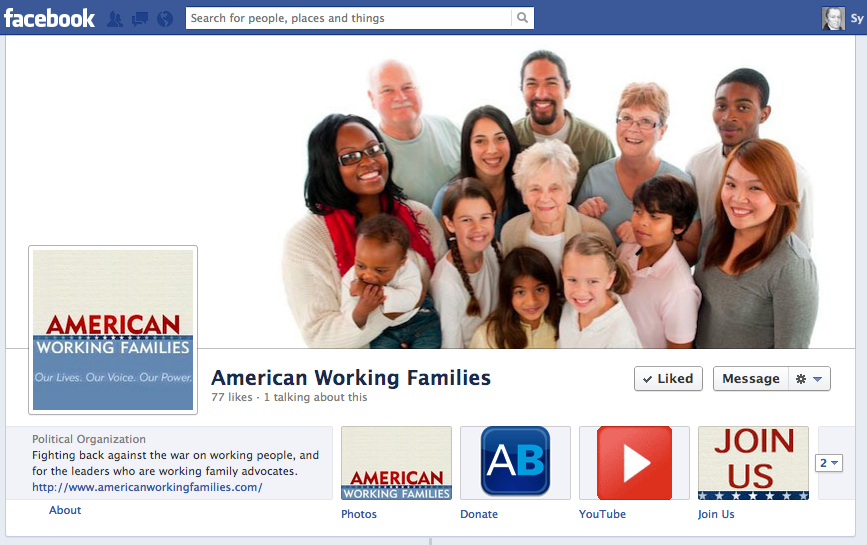 Update 2: It turns out several of the “American Working Families” are Canadian. The cover photo on AWF’s facebook page features a diverse group of 13 people, but many of them aren’t US residents. According to photographer Chris Futcher, who owns the stock image, said the picture was taken in Canada and several of the model are Canadian. It was flagged by Dennis Roddy, a spokesman for Governor Corbett.

Full disclosure: American Working Families advertised with this ad on PoliticsPA in May.

Update 3: The saga continues! This morning, Jackson and AWF released a statement criticizing Roddy’s comments on this story – and in the comment section below:

“While it is appropriate for the governor’s office to respond to the issues our organization has raised about the administration’s record it is entirely inappropriate for a state employee on state time and using taxpayer-funded resources to conduct political opposition research and to post political statements on a blog dedicated to politics. We view this as a taxpayer-funded act of political intimidation.”

The full statement is here.

Roddy defended his response, noting that he had looked into the matter back in May when the group first went on the air. He said that he looked into the group so that he could accurately answer media requests.

“We can’t answer somebody if we don’t know who this guy is,” he said.

“In May our office got calls from the press asking about Jackson’s attack on the governor’s record. Mind you, they didn’t call the campaign — they called the Governor’s Press Office. There is a reason: this is about a sitting governor’s performance.

“I was not practicing politics; I was engaging in journalism. It is common sense that in responding to critics, we find out who they are and share our findings with the same media that inquired.”

The fact remains that Roddy is a state staffer in the governor’s office who, on the taxpayer’s dime, who conducted opposition research while monitoring and responding to a blog dedicated to politics. It is obvious that this was highly inappropriate and went beyond what would be considered an appropriate and de mimimis political response.

Governor Corbett’s office clearly needs to be trained in office ethics and his communications office needs a lesson in how to properly refer political questions to the appropriate office.

Previous to monitoring a political blog and posting political attack on the blog dedicated to politics, Roddy conducted opposition research that went well beyond gathering information on an organization.  He sought to learn background information about people who appeared on our organization’s Facebook page.  Roddy even went to the trouble of finding the photographer of photo, learning where he resided or worked, and then contacted the photographer in Canada — while at work in the governor’s office.

Objective people who read the comments that Roddy posted on a political blog will arrive at the obvious conclusion that his actions were purely political in nature and had absolutely nothing to do with ”engaging in journalism.”

And, here is more from Roddy:

My job here is to find answers to questions and in May, when he started airing attack ads against the governor, the first question we got from the press was: who is Bud Jackson and why is he doing this?

So I entered his name in Google and out came the details. They weren’t pretty.

When I saw that photo at the top of his group’s Facebook page, the first question that came to mind was whether these might be the people passing themselves off as American Working Families, his group.

So, I pasted that photo into the Google search engine and up came a photographer in Toronto, who I telephoned just to make sure that this was indeed a stock photo.

In his tinfoil hat view of the world, Bud Jackson imagines a Google search to constitute sophisticated opposition research.

Mr. Jackson’s history of sleaze and hypocrisy makes it impossible to respond to his TV ads without pointing out the fact that these attacks are coming from someone who is ethically unqualified to advise the people of Pennsylvania on any matter of public importance.