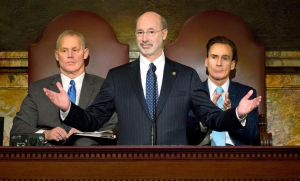 Gov. Tom Wolf and GOP leaders said there would be a budget by Thanksgiving, before moving the goalposts to Christmas. Turns out, they meant to say Easter.

It was a 37-week war over the future of the Keystone State, but now it is finally over (at least until negotiations soon begin anew on next year’s budget.)

Last April, Gov. Tom Wolf made it very clear he knew the fight would be on to enact his spending priorities, telling the Inquirer at the time, “I’m planning on spending the summer here. And the fall, and the winter.”

Wolf’s prediction was spot-on, with PA’s 9-month budget impasse set to end on Sunday, just a week after the start of spring.

The $30 billion budget bill will lapse into law without the Governor’s signature, with Wolf disappointed by the final version that landed on his desk. Just over a week ago, Wolf promised to veto the bill, before Senate Democrats warned him they might join their Republican colleagues for a veto override.

Though the bill contains very little of what he set out to obtain at the start of negotiations last year, Wolf said it is time to move on to the 2016-17 budget.

Gov. Wolf used his veto pen on four separate occasions over the course of the stalemate, while failing to sign a single budget-related bill.

To kick off the stalemate, Wolf vetoed a $30.1 billion budget package that contained only the GOP’s priorities and none of his campaign demands.

About a week later, Wolf broke out his pen again to send back a pension reform bill, which would continue to be a sticking point throughout the process.

In August, GOP legislative leaders offered the Governor a “take it or leave it” deal, in which they included concessions on pensions and $400 million in education funding. Though Wolf didn’t have to veto anything, he still didn’t accept the offer, as it would have almost guaranteed liquor privatization in order to fund the education spending hike.

At the end of September, Wolf vetoed a stopgap measure he called an “avoidance maneuver” after the House and Senate spent weeks trying to push it through for his signature, knowing they wouldn’t get it.

After this veto, GOP legislative leaders gave the Governor a golden opportunity to win the budget battle outright, by giving his tax plans a vote. They knew he couldn’t win, but used the vote as a way to show Wolf just how unpopular his plans were, even with his own party.

PoliticsPA readers had quite a few chances over the past year to make their feelings about the budget known.

Just one week after Wolf kicked off the stalemate by vetoing a GOP proposal, two-thirds of our readers were blaming the Governor for missing the June 30th deadline.

By the end of August, the blame had shifted from Wolf to the General Assembly, with a Franklin & Marshall poll showing 54% blamed their legislators.

A reader poll in April 2015 did quite well in predicting protracted negotiations. Just 10% said a deal would be made by the June 30th deadline, while a plurality of 35% said the stalemate would last until September or later. In retrospect, it’d be very interesting to see how many of them would guessed a budget would be passed in March.

A reader poll in September showed a bit more optimism, with 62% saying Wolf and the State Legislature could get a deal done by the end of the year.

By the time January came, however, all optimism had disintegrated. 64% of our readers said they did not expect to see a 2015-16 budget passed at all in 2016.

The state considered several budget permutations throughout the negotiation process.

Gov. Wolf’s demands started at a $30.8 billion budget – including a 6% state government spending increase and $400 million in additional education funding – while using a 5.3% natural gas severance tax and an increase in PA’s sales and income taxes to offset the spending.

GOP leaders were never big on raising taxes, and instead argued for reform to the pension and property tax systems, with spending closer to $30 billion.

The final 2015-16 budget is a $30 billion spending plan with no tax increases, but it does provide an additional $200 million in education funding.

Still, it is hard to chalk this one up as a win for Gov. Wolf, so the victory must go to the GOP-controlled Legislature, though they won’t come out of this smelling like roses either.