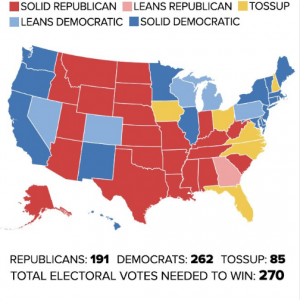 Yet another team of observers have rated Pennsylvania as “lean Democratic” in the presidential election.

Recently the Washington Post, NBC News, the Cook Political Report, and CNN have all classified Pennsylvania as “Lean Democratic” in their electoral college projections.

“Michigan, Wisconsin and Pennsylvania are usually reliably Democratic states, but Trump’s popularity among working-class whites may put these states in play,” John Kruzel and Ryan Struyk of ABC News wrote. “But a win would be an upset for Trump: Democrats have won every presidential race in Michigan and Pennsylvania since 1992 and Wisconsin since 1988.”

Additionally, Politico identified Pennsylvania as one of the eleven states likely to decide the 2016 presidential contest between Democratic nominee Hillary Clinton and Republican nominee Donald Trump. 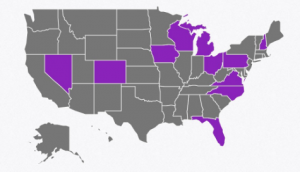 Pennsylvania is being described as part of the Democrats’ “Blue Wall” along with Iowa, Michigan, New Hampshire, Ohio and Wisconsin.

“This set of states, on the other hand, have been more reliably Democratic over the past few decades. Obama won all six states in both elections, and John Kerry won all but Iowa and Ohio in 2004,” Steven Shepard of Politico wrote. “Michigan, Pennsylvania and Wisconsin appear on this list, even though Republicans haven’t won Michigan and Pennsylvania since 1988, and Wisconsin since 1984. But they are all whiter, in some cases overwhelmingly so, than the nation as a whole. And some Republicans think the combination of white voters’ drift to the GOP and Trump’s appeal puts these states firmly in play.”

“Polls thus far don’t show a dramatic rejiggering of the map in these states, however,” they concluded. “The race appears close in Iowa and Ohio, according to polls going back to last year. But more recent surveys this year show Clinton with about a 9-point lead in Michigan, a 7-point head-start in New Hampshire, a 6-point edge in Pennsylvania and an 11-point advantage in Wisconsin.”