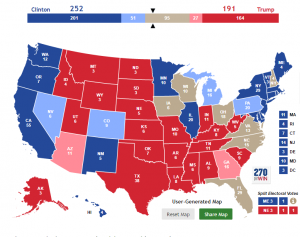 A consensus is emerging.

In the last month NBC News, Cook Political Report, and CNN have all classified Pennsylvania as “Lean Democratic” in their electoral college projections.

Chris Cillizza and Philip Bump of the site’s political page, “The Fix”, look at Pennsylvania and Michigan as similar cases.

“Michigan and Pennsylvania have each voted Democratic since 1992. The electorate in each in 2012 was about an eighth black, a group that strongly supports Clinton,” they write. “Trump’s campaign hinges on his ability to appeal to blue-collar white voters in Rust Belt states like these two, luring Democrats to his candidacy and turning out people who don’t normally vote. So far, there’s not much evidence Trump has turned out new voters, and the number of working-class whites who still vote Democratic has dwindled. (In 2014, white Midwesterners without a college degree preferred Republican House candidates by almost 30 points.) Unless Trump shows that he can move these numbers, these states are likely to stay blue.”

They also have Colorado and Nevada as Lean Democratic states while Georgia and Arizona earn Lean Republican status.