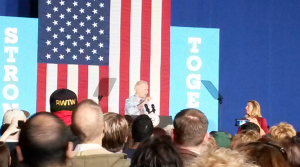 As a result, it’s all hands on deck. The Vice President did his part by stumping in Bristol, a white working class Democratic haven in lower Bucks County.

The VP and the Second Lady were joined by a who’s who of PA Dems, including Governor Tom Wolf, Senator Bob Casey, Senate nominee Katie McGinty PA-8 nominee Steve Santarsiero.

In fact, Biden seemed as concerned with electing McGinty as electing Clinton. We already know he made winning back the Senate his personal goal of 2016 and that he’s cut a TV ad for McGinty.

The Vice President was particularly brutal on Pat Toomey and his reluctance to state whether he agrees or supports Donald Trump.

“When you ask a Republican Senator 10 times in 10 minutes again whether he supports the Republican nominee for president and he can’t answer you, he’s either got lockjaw or there’s something wrong with him,” Biden stated.

He also hammered the incumbent for a new ad that features President Obama praising the GOP Senator. Biden then ticked through the areas where Trump and Toomey agree on policy issues, concluding with climate climate.

“Toomey says the role of human activity in climate change is ‘very much disputed and still debated.’ Senator Toomey, have you acknowledged gravity yet?” Biden asked.

“President Obama and Vice President Biden attack Pat Toomey during campaign season, and praise him when they try to get things passed in the Senate,” Toomey Campaign Spokesman Ted Kwong responded. “Voters get that. The difference in this Senate race is between having Pat Toomey, an independent voice who opposes bad ideas and supports good ones from either party, and Katie McGinty, who is an ethically challenged rubber stamp for the far left of the Democratic Party.”

Overall, it was a Democratic message to a Democratic crowd. It’s a strategy that makes sense in the campaign’s final hours, when the focus is all on turnout.

“Tonight is the one night of the year that is a Republican’s favorite night. It’s when we officially turn the clock back one hour,” Biden remarked early on, referring to Daylight Saving Time. “These guys are trying to turn it back a decade or two or three. They get to turn it back tonight for one hour, but I don’t get comfortable with that because they ain’t seen nothing yet.”

“And here’s the deal, all kidding aside, this election may literally, not figuratively, come down to Pennsylvania and literally come down to what happens in Bucks County,” he concluded. “That’s statistically accurate. You got to carry the whole damn county.”