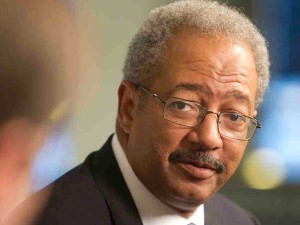 Well, the other shoe finally dropped.

“Congressman Chaka Fattah Sr., 58, of Philadelphia; lobbyist Herbert Vederman, 69, of Palm Beach, Florida; Fattah’s Congressional District Director Bonnie Bowser, 59, of Philadelphia; and Robert Brand, 69, of Philadelphia; and Karen Nicholas, 57, of Williamstown, New Jersey, were charged today in a 29-count indictment with participating in a racketeering conspiracy and other crimes, including bribery; conspiracy to commit mail, wire and honest services fraud; and multiple counts of mail fraud, falsification of records, bank fraud, making false statements to a financial institution and money laundering,” according to a statement from the Department of Justice.

“As charged in the indictment, Congressman Fattah and his associates embarked on a wide-ranging conspiracy involving bribery, concealment of unlawful campaign contributions and theft of charitable and federal funds to advance their own personal interests,” said Assistant Attorney General Leslie Caldwell.  “When elected officials betray the trust and confidence placed in them by the public, the department will do everything we can to ensure that they are held accountable.  Public corruption takes a particularly heavy toll on our democracy because it undermines people’s basic belief that our elected leaders are committed to serving the public interest, not to lining their own pockets.”

During Fattah’s unsuccessful 2007 Philly mayoral campaign, he borrowed $1 million from a donor and disguised it as a loan to a consulting company. After the election, the remaining $400,000 was returned.

To secure the rest of the money, Rep. Fattah funneled federal and charity grants through an educational nonprofit he founded (Fattah sits on the powerful House Appropriations Committee).

Rep. Fattah also employed similar methods to use campaign money to pay back political consultants and even used some of it for his son’s college debts.

To top it all off, lobbyist Herbert Vederman (who was indicted along with Fattah) bribed the Congressman in order to secure an ambassadorship or appointment to the U.S. Trade Commission.

None of these charges, though, are particularly surprising. The writing has been on the wall for Chaka Fattah for quite some time.

Last August, the Congressman’s former Chief of Staff Greg Naylor was indicted for defrauding the IRS and stealing from Philadelphia schools. While working on Fattah’s 2007 mayoral bid, Naylor concealed the theft of grants and charitable funds to repay debts from that campaign.

The ex-Chief of Staff eventually plead guilty to the charges. His plea memo can be read here.

Fattah Jr. has also been indicted for filing false tax returns, and using money from business loans to pay for personal expenses. The Congressman’s son chose to represent himself at his trial and is accused of misusing over $200,000 in bank loans.

That still is nothing compared to his father who, according to a Daily News study, paid out at least $5.8 million to associates through taxpayer-funded nonprofits.

Chaka Fattah finished fourth in the 2007 Philadelphia Democratic Mayoral Primary, for which he staked his entire career and reputation, gaining just 15% of the vote.

UPDATE: Luke Russert of MSNBC is reporting that Congressman Fattah will “recuse” himself from his seat on the Appropriations Committee:

Fattah: I'll recuse myself from my leadership position on appropriations till this is cleared up

UPDATE 2: House Minority Leader Nancy Pelosi confirms Fattah is temporarily stepping down from some of his positions on the Appropriations Committee:

Nancy Pelosi on Fattah indictment – says he has given up ranking spot on approps subcommittee: pic.twitter.com/45bnhN0kvv