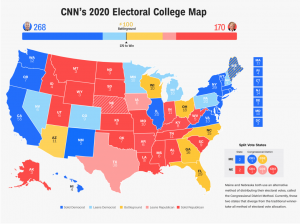 The presidential race in the Keystone State now leans in the Democrats favor, according to the latest ratings from CNN’s 2020 Electoral College map.

In an article published on August 3, Pennsylvania moves from Battleground into the Leans Democrat category.

“The national political landscape has clearly and significantly shifted in Joe Biden’s favor since he emerged as the Democratic Party’s presumptive nominee back in March just as the public health emergency was taking hold,” CNN Political Director David Chalian writes.

Five states and one congressional district moved in the Democrats favor in this latest ratings update. Pennsylvania and Michigan both moved from the Battleground category into the Leans Democratic category, providing former Vice President Joe Biden with a more favorable map over President Donald Trump.

“Michigan and Pennsylvania, two states Trump won in 2016 that had been reliably blue for the better part of two decades in presidential elections, are being moved from battleground to lean Democrat, placing an additional 36 electoral votes to Biden’s total,” Chalian writes.

Neither party has the 270 electoral votes needed to capture the White House, although Biden holds a substantial advantage over Trump in this rating.

CNN is just the latest national outlet to move the presidential race into Biden’s favor.

The Cook Political Report, Larry Sabato’s Crystal Ball, and Politico, all moved the race to Leans Democratic since June.