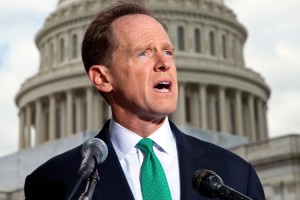 Forecasts frequently change, a day that is supposed to be rainy frequently turns out to be sunny. After an update to Sabato’s Crystal Ball ratings was published today, we can see political forecasts can shift as well.

“While Sen. Pat Toomey (R) only barely beat former Rep. Joe Sestak (D) in 2010, we think the race has developed in such a way that he merits a slight edge in our ratings: We’re moving Pennsylvania Senate to Leans Republican,” wrote Kondik.

Terry Madonna and Michael Young are quoted in this prediction with their analysis of Toomey’s personal style to be “neither confrontational nor provocative.”

“His mild mannered and low-key demeanor resonates well with the Pennsylvania electorate. Indeed, it is a style Republicans have won with for decades,” commented Madonna and Young.

While the Crystal Ball does not predict Toomey to beat himself, it does note that his withdrawal from sponsorship of a bill that would have delayed a train safety system after the Amtrak crash is an issue that Democrats could use against him. They categorize him as “significantly more conservative than a majority of his constituents.”

Finally, the report notes that Joe Sestak, Toomey’s likely competition, is hated by the national Democrats. While they will most likely push Montgomery County Commissioner Josh Shapiro to enter the race, it is likely that Sestak will be all they have.

Although they may not like him, Sestak could very well be the Democrats’ best option against Toomey, as he came close six years ago.