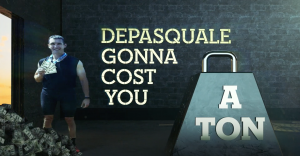 For the first time since the primary, the National Republican Congressional Committee is on television in Pennsylvania.

It teases the workout language and imagery challenger Eugene DePasquale used in a previous ad where he’s doing CrossFit as a metaphor for how he will raise taxes on the residents in the 10th Congressional District.

“Proud liberal Eugene DePasquale will cost you a ton,” a voiceover says to begin the 30 second spot, “Impossible.”

“He voted to raise your taxes, increase your bills,” the ad continues. “All pay’in no gain DePasquale was caught wasting tens of thousands of your taxpayer dollars pumping up himself and his campaign, so he can go to Washington and push up your taxes again by 4 trillion to fund Nancy Pelosi’s socialist wishlist.”

The ad closes with a shot at his last name. “Eugene DePasquale: tough… to spell! Impossible to afford.”

DePasquale’s campaign punched back at the attack saying that he remains focused on the issues at hand, while Rep. Scott Perry (R-York) is not.

“While Scott Perry and his special interest backers get increasingly desperate, Eugene is talking to South Central Pennsylvanians about issues that matter to them, like expanding access to affordable, quality health care, lowering prescription drug costs, and ending corporate influence on our politics,” said Kunal Atit, DePasquale Campaign Communications Director. “As their attacks continue to get more outlandish, we’re staying focused.”

A spokesperson from the NRCC confirmed it is the first TV ad launched in Pennsylvania since the primary.