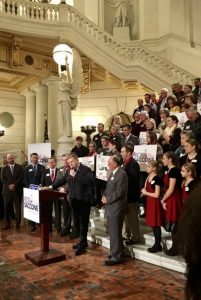 State Rep. Rick Saccone officially kicked off his campaign against Senator Bob Casey in the Capitol Rotunda in Harrisburg, making him the first Republican in the race.

“President Trump was elected to go drain the swamp, and I want to go and help him,” Saccone said during his announcement.

Saccone, of Allegheny County, says he will point to the differences between himself and Casey.

“The people are mad at him, and want him out of Congress.  He is a career politician and is out of touch with the people,” he said to PoliticsPA after the announcement.

“A total unknown statewide, Saccone will have to raise a boatload of money to whitewash his reckless record,” American Bridge President Jessica Mackler said in a statement

Saccone filed his statement of candidacy earlier this month with the FEC.

Saccone currently is serving his fourth term in the State House. An Air Force veteran, he remained in South Korea after retirement to host an English language newscast. He holds a Ph.D in International Affairs from the University of Pittsburgh and has taught classes at Saint Vincent College.

Presently, Saccone is the only Republican in the race. Congressman Pat Meehan announced his decision not to run earlier this month. Others possible candidates include House Majority Leader Dave Reed, and Congressman Mike Kelly.