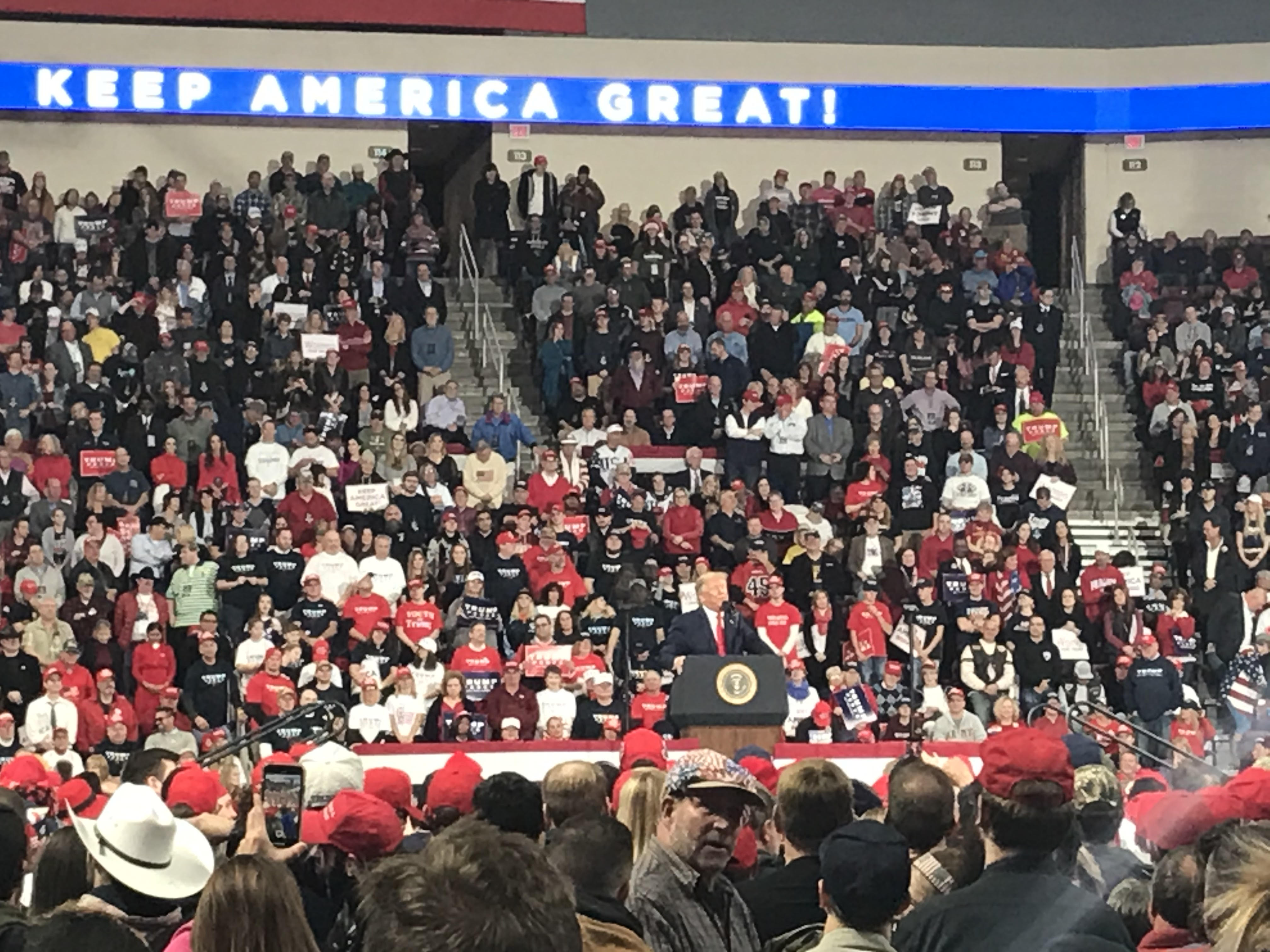 HERSHEY- President Donald Trump capped off an eventful day, that included House Democrats officially introducing articles of impeachment against him and the announcement of the finalized USMCA trade deal, with a rally at the Giant Center.

During his hour-plus long speech that touched on a wide variety of topics, he was sure to spike the football on a key theme that he’s stressed in his multiple visits to the state in 2019: the United States Mexico Canada trade agreement.

“I’m thrilled to report that we are on the verge of ending the NAFTA catastrophe, once and for all,” Trump said.

When Trump first announced his bid for the presidency, his opposition to free trade and embracement of tariffs set himself apart from many in the Republican Party, but is also perceived to have helped him secure rustbelt states like Pennsylvania in the 2016 election.

“We’re ending decades of bad trade policies that devastated communities all across the state,” Trump said. “For generations, manufacturing was the bedrock of your economy.”

While most Democrats and Republicans in the state’s Congressional delegation have publicly voiced support for the new trade deal, including Reps. Matt Cartwright (D-Lackawanna) and Susan Wild (D-Lehigh) being targeted by the NRCC, the state’s highest ranking elected Republican, Sen. Pat Toomey (R-PA), blasted the USMCA today saying it would be a “big mistake” to pass a deal that he believes “moved way to the left.”

Vice President Mike Pence, who made multiple stops in the state prior to speaking at the rally on Tuesday evening, credited Trump for garnering enough support for the trade deal and said that it was a win for all American workers. 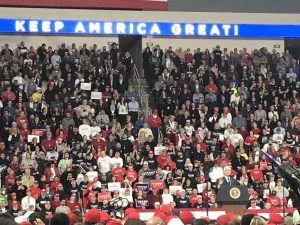 “The USMCA is a win for American workers and American farmers. It’s going to create hundreds of thousands of jobs all across this state and nation,” Pence said.

“There’s a lot of people out there taking credit for the USMCA,” Pence continued. “But I was there every step of the way and make no mistake about it, President Donald Trump got it done.”

Trump said the state was doing better than ever before due to his administration’s economic policies, which he said included “ending the war on energy” and implementing steel tariffs.

Trump somewhat credited the impeachment investigation as a reason that the deal was passed. He accused Pelosi of making the announcement of support for the trade deal to “smother the impeachment crap.”

Trump spoke at length about impeachment as well, saying that the Democrats were only doing it because he believes that is the only way they can deter him from winning another term. In addition to saying that he did nothing wrong, referring to it as “impeachment lite,” he believes Democrats who vote for it could cost them their majority in the House.

“Any Democrat that votes for this sham will be voting to sacrifice their House majority, their dignity and their career,” Trump said.

While making his case that impeachment was unpopular, he cited a FireHouse Strategies poll released earlier this week that showed Trump leading all the highest polling Democrats in a hypothetical head to head matchup in three key states, including Pennsylvania. The Democrat within the closest margin to Trump in the state’s poll was former New York City Mayor Michael Bloomberg trailing by 4 points, while his largest lead in a hypothetical head to head matchup was over Sen. Bernie Sanders by 10 points. However, Firehouse Strategies is a public affairs firm founded by 3 senior aides on Marco Rubio’s 2016 presidential campaign.

Although Trump pointed to a poll by a GOP-friendly firm, multiple recent polls released prior to the impeachment hearings showed Trump in a dead heat with the leading Democrats. 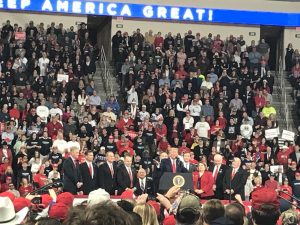 Trump pleaded with the those in the jam-packed arena to vote for Republicans in the House to support his agenda, “even if you don’t like them.” He called for Congressional Republicans in attendance up to the stage, which included all of the delegation except Reps. Brian Fitzpatrick (R-Bucks) and Guy Reschenthaler (R-Allegheny). Pennsylvania Republican Party Chairman Lawrence Tabas, Trump 2020 Pennsylvania campaign chair Bernie Comfort, Pennsylvania’s Republican National Committeeman Bob Asher, RNC Co-Chair Tommy Hicks, and Trump 2016 Pennsylvania campaign senior advisor David Urban also joined the stage.

As he lauded the Republicans in Congress in the state as “warriors” he delivered direct shots at various Pennsylvania elected officials with Philadelphia District Attorney Larry Krasner being the one he provided the most criticism to, although he never mentioned him by name.

“A sanctuary city in Philadelphia,” Trump said. “Is one of the very worst sanctuaries anywhere in America.”

“You may have the worst District Attorney,” Trump said, talking about Krasner. “You better get yourself a new prosecutor.”

The other Pennsylvania Democrat he criticized in his speech was Gov. Tom Wolf, although he didn’t mention him by name, as someone who doesn’t support “school choice.”

Leading up to Trump’s speech on Tuesday evening, the Pennsylvania Democratic Party held a press call criticizing the current administration’s policies on healthcare and agriculture. When Pence and Trump’s visit was made public, the state Democratic Party said the appearance in the state from them was a sign that they are playing “defense” in Pennsylvania.

“Trump and Pence are on their heels in Pennsylvania because of their toxic record on health care and broken promises to working families, so it’s not surprising that they’re on defense in the commonwealth,” said Pennsylvania Democratic Party spokesman Andres Anzola, a few days before the rally. “Democrats are energized and working around the clock to ensure they are defeated next November.”

“As a candidate, Donald Trump promised that he would help Pennsylvanians by stopping the skyrocketing costs of prescription drugs and defending protections for pre-existing conditions,” Mills said. “As President, he has broken those promises.”

“The President knows that he has to play defense in Pennsylvania because of his broken promises to working families in our commonwealth,” Mills continued in the release. “Pennsylvania Democrats are fired up and ready to work around the clock to ensure victory in 2020. The future of our nation depends on it.”

Although Trump’s team has begun the full court press to retain the state in 2020, Democrats have also been jockeying for support in Pennsylvania and multiple candidates will be present in Pittsburgh on Saturday for a public education forum.