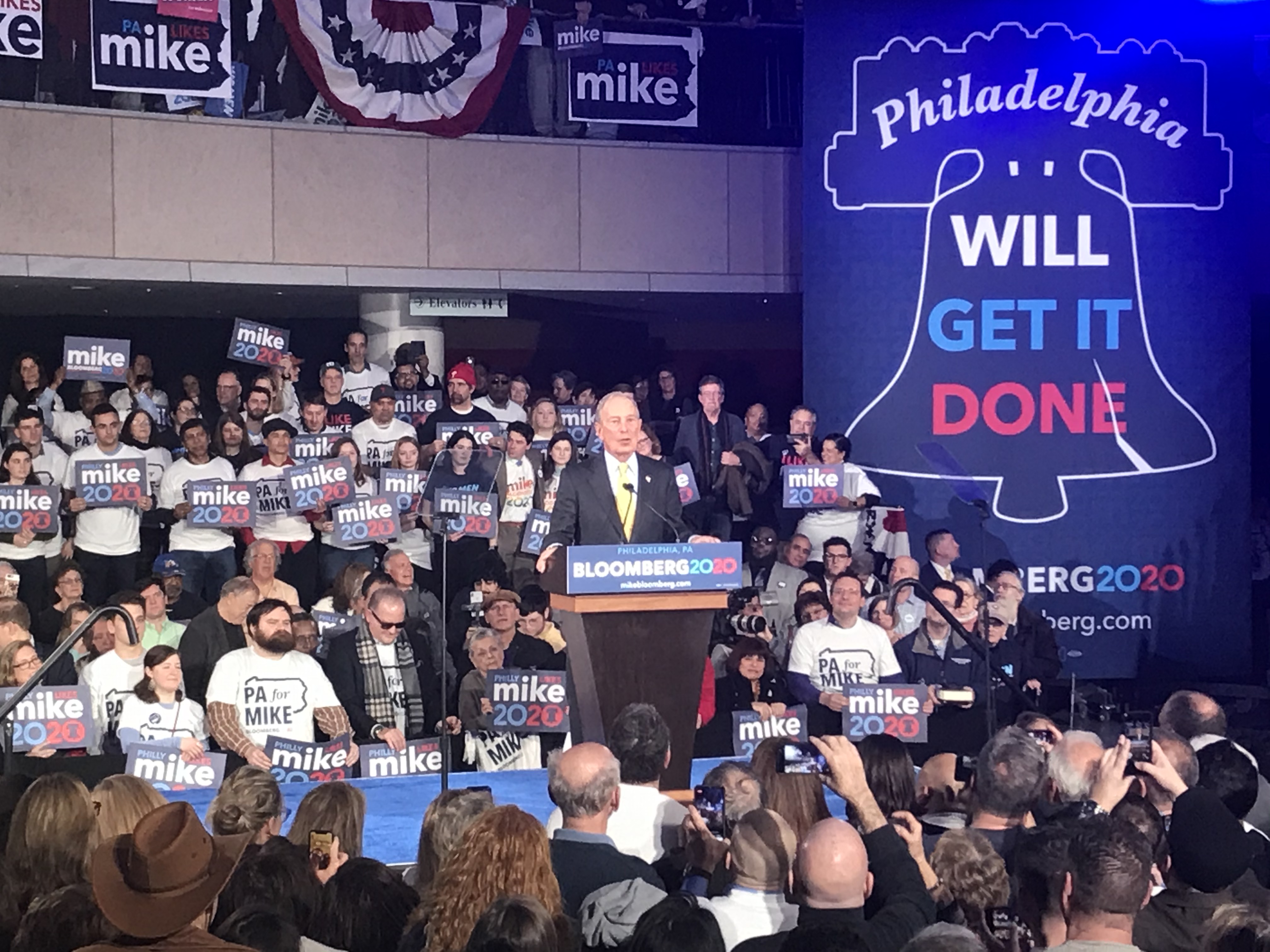 “Let me be clear,” Bloomberg said at the National Constitution Center on Tuesday evening. “I am running to defeat Donald Trump.”

Bloomberg formally launched his presidential bid in November, joining the crowded field of Democratic hopefuls months after their campaigns started. Due to his later entry, Bloomberg has elected to bypass key early states like Iowa and New Hampshire and place his focus on other delegate heavy states, including Pennsylvania.

While the nation still awaits to find out the winner in the debacle that was the 2020 Iowa caucuses, although partial returns indicate that former South Bend Mayor Pete Buttigieg and Sen. Bernie Sanders appear to clearly hold the 1st and 2nd position, Bloomberg believed the results were proof that he is the lone Democratic candidate that can “build a coalition broad enough to unite the party.”

“I think the results from Iowa underscore that we need a candidate who can build a coalition broad enough to unite the party and strong enough to go toe to toe with Donald Trump and beat him,” Bloomberg said.

“I got into this race 10 weeks ago because I was deeply concerned that Donald Trump was on track to win the election,” Bloomberg said. “I could not sit by and let that happen.”

During his 15 minute address, Bloomberg did not specifically criticize one of the other Democratic presidential hopefuls, adding that he will support whoever the nominee will be, but instead attempted to paint himself as the “un-Trump,” and called the president a “liar.”

“He’ll say that the state of the Union is strong,” Bloomberg said. “But the truth, and we all know it, is that our union is divided like never before in our lifetimes. Because let’s face it, we have an angry, out of control, lawless president dividing the American people and abusing his office.”

Bloomberg touted his three terms as mayor of New York City and his record in the private sector. He recalled his 2016 DNC speech in Philadelphia, in which he called Trump a “con-man” and saying his victory plus the Republicans response to Trump of “not holding him accountable” in the first two years prompted him to support 21 Democratic candidates who went on to win seats in Congress in 2018.

Although Bloomberg boasted about his support for Democrats across the nation, his gun-control group endorsed Sen. Pat Toomey (R) in 2016 and Rep. Brian Fitzpatrick (R-Bucks) in 2018.

While discussing key policy positions, his Tuesday evening rally somewhat echoed much of the message in his December appearance in Philadelphia, by detailing his record of tackling a number of issues including gun control, climate change, healthcare and more as the mayor of the nation’s largest city.

Bloomberg, a billionaire, is self funding his campaign and has already spent more than $12 million so far on television and radio ads across Pennsylvania’s six media markets, the Philadelphia Inquirer reports.

Bloomberg took a jab at Trump while talking about the possibility of the general election being “between two New York billionaires.”

“Let me tell you, I get a certain question all the time,” Bloomberg said. “Since it is the elephant in the room, I would like to address it again tonight, right here.”

“People ask me, ‘do you really want a general election to be between two New York billionaires,’” Bloomberg said. “To which I say, ‘who’s the other one.’”

Prior to Bloomberg’s Philadelphia visit, the Republican National Committee issued a statement expressing their confidence that Trump will carry Pennsylvania again in 2020.

“Michael Bloomberg can continue to light his money on fire, but the fact is with a booming economy and near record low unemployment, Pennsylvanians will re-elect President Trump in November,” said RNC Spokesperson Michael Joyce. 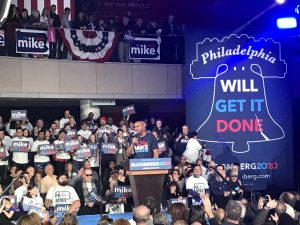 Joining Bloomberg at the Tuesday evening rally were former Philadelphia Mayor Michael Nutter, who serves as the campaign’s national political co-chair, who said the two worked together while both serving as mayors and is the candidate that can “get it done,” and former Philadelphia Eagles linebacker Dhani Jones who called Bloomberg “America’s linebacker.” The Philadelphia Inquirer reports that the Bloomberg campaign estimated the crowd to be close to 2,000 people.

Prior to Bloomberg’s rally in Philadelphia, he held an event in Detroit, MI.

While many of the other Democratic presidential hopefuls have their focus on the early primary states, the Trump campaign is holding their first significant event in the state of the presidential election year.

On Wednesday, Vice President Mike Pence will be making his first swing through the state in 2020, participating in a school choice event in Philadelphia in the morning, followed by headlining a “Women for Trump” event in Camp Hill alongside Secretary of Education Betsy DeVos and Trump administration spokeswoman Kellyanne Conway.

As of Tuesday, the Real Clear Politics average shows Biden leading the national Democratic primary field with 27% of the vote, while Sen. Bernie Sanders (I-VT) is in second with 23.7%, Sen. Elizabeth Warren (D-MA) in third place with 15%, Bloomberg in fourth place with 8.3%, and former South Bend Mayor Pete Buttigieg in fifth place with 6.5%.

Biden maintains a several point lead in the Pennsylvania Democratic primary leading the pack with 22.3%, followed by Warren with 13%, Sanders with 11.7%, and Buttigieg with 6%, according to the Real Clear Politics average. A new Franklin & Marshall College poll released last week shows a tighter race in the keystone state with Biden leading at 22%, followed by Sanders in second place with 15%, Warren in third place with 14%, Bloomberg in fourth place with 7%, and Buttigieg in fifth place at 6%.