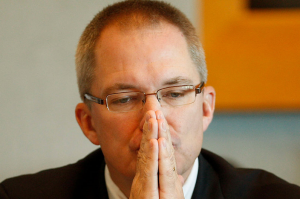 How high up will the FBI’s pay-to-play probe go?

John Estey, a top Philly Democrat, is set to plead guilty to wire fraud charges stemming from a 2011 sting by the FBI, according to a report by Craig R. McCoy, Mark Fazlollah and Angela Couloumbis of the Inquirer.

On Friday, federal prosecutors and Estey’s lawyer announced the intended plea, sending another shockwave through state politics as the FBI’s corruption investigation continues to expand.

Estey was the Chief of Staff during former Gov. Ed Rendell’s first term (2003-2007), before moving to Ballard & Spahr to head the Philadelphia law firm’s lobbying arm.

It was during that time that Estey was snagged in an FBI sting to identify corrupt state lawmakers.

In October 2009, FBI agents posing as company executives of an “out-of-state business” hired Estey to represent them, according to the report.

A year and a half later, the agents gave Estey $20,000 to funnel to state lawmakers, which Estey said he would split between three lawmakers and a “particular leadership,” court documents show.

Instead of following through and breaking state campaign finance laws, Estey kept $13,000 for himself. Authorities did not say where the other $7,000 ended up.

The Inquirer found only one donation made by Estey after the agents gave him the bribe money – $1,000 to State Sen. Vincent Hughes in July 2011.

In late 2011 – when his cooperation with the FBI presumably began – Estey was hired by the Hershey Trust Company to serve as general counsel while the trust was being investigated by the PA Attorney General.

Estey held executive-level positions with the trust, including a stint as interim president of the Milton Hershey School, until being fired after the court documents were made public on Friday.

Estey – who also served as chairman of the Delaware River Port Authority, the Philadelphia Regional Port Authority and the Independence Visitor Center – started a political action committee that brought in $125K in just four days, though it is unclear whether this was in cooperation with federal agents, according to the report.

The Enterprise Fund only backed one candidate and it came a day too late. On May 21, 2014, the PAC contributed all $125K to former Treasurer Rob McCord’s run for Governor, a day after Tom Wolf won the Democratic gubernatorial primary.

Last week, it was revealed that McCord wore a wire for the FBI for several weeks, before resigning and ultimately pleading guilty to federal charges in February 2015.

Elsewhere in the FBI’s play-to-play investigation, Allentown Mayor Ed Pawlowski’s days in elected office must surely be numbered after his former campaign manager Mike Fleck pleaded guilty to one count of conspiracy to commit extortion and bribery and one count of tax evasion.

Pawlowski is at the center of an investigation into his city’s contracting practices, while the FBI are also investigating one of Fleck’s other clients, former Reading Mayor Vaughn Spencer.

Pawlowski and Spencer have yet to be identified as targets of the investigation or charged by authorities.