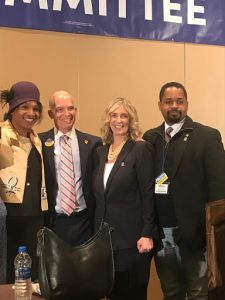 McCaffery, brother of former state Supreme Court Justice Seamus McCaffery, said he was glad to receive the party endorsement, but stressed that the work was far from over.

“Make no mistake, it is not over,” he said. “Today, we start… we have to go to 67 counties and fight for every single vote.”

Green-Hawkins, who also served as one of the 19 superdelegates from Pennsylvania in 2016 and as a DNC committeewoman during the Obama administration, was introduced on the floor by Auditor General Eugene DePasquale, who is serving as the finance chair for her campaign.

She thanked the party for the endorsement, but first laid out the symbolism behind her wardrobe for the day. She mentioned how her 14 aunts grew up in the segregated south and would wear crowns when they went to church, pointing to the hat she was wearing. She also wore a yellow shirt that says “Sisters of Steel” that symbolize her support for the United Steelworkers for America.

“I think you for all of your hard work, for carrying petitions to help us get on the ballot…,” Green-Hawkins said. “I will work hard and I will make you proud to be one of two Democrats elected to the Superior Court of Pennsylvania.”

Coming in third place was Beth Tarasi, an attorney from Allegheny County, with 83 votes. There were 18 abstention votes as well.

The night prior included fiery speeches from a number of individuals who believe the path towards sustained success revolve around boosting women seeking office and painting President Donald Trump’s policies and actions as a threat to the country.

DNC Vice Chair Michael Blake, keynote speaker of the evening, told Democrats the time to be silent was over and if the party was to continue momentum from the 2018 election, it was needed to continue to call out Trump’s administration.

“If we want people to believe in us as Democrats,” Blake said. “Then we’ve got to call out the nonsense for what’s going on.”

“When you have a racist, sexist, misogynistic, discriminatory, demagogue in the White House who has a corrupt regime around him. Don’t be silent about that.”

Blake’s address was just hours after the reports that Special Counsel Robert Mueller’s investigation was completed. Initial reports indicate that Mueller will not be issuing additional indictments, but Blake believes that Trump is not in the clear yet.

“I know many of us have mixed feelings about what happened today with the Mueller (report), I’m saying to a few folks when I was coming in, I have a very strong feeling, especially since we were attacked at the DNC, that tonight is just the beginning,” Blake said. “Mueller is too smart of a man to just say, ‘we’re going to let this go.”

“There’s a reason that things have been going to other outlets such as the Southern District. There’s a reason why in New York right now we’re actually addressing a double jeopardy law….,” Blake continued. 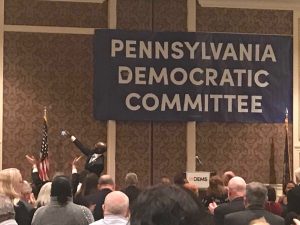 Rep. Madeleine Dean (D-Montgomery), who serves on the House Judiciary Committee, thanked Mueller for finishing the report, but urged that the report be made public.

“We will not rest until that report is made fully transparent,” Dean said, which was followed by applause. “The American people deserve to know what has happened and deserve to know if we have a President who is working out of self interest or our interest.”

Dean attacked Trump for defying “every norm of decency, civility and respect,” but lauded the work that Congressional Democrats have done thus far and believes more progress will be made as they remain in the majority, specifically citing gun control.

“In two days time we passed two bills regarding gun violence,” she said. “2 days time we did more than this Congress has done in 2 decades.”

Dean, one of the four Democratic women breaking Pennsylvania’s all male Congressional delegation in 2018, believes the historic number of women elected to office in 2018 will help continue to propel the party forward.

The Pennsylvania Democratic Party experienced pick ups in Congress, the state House, and state Senate. Although they remain in the minority in the state House and Senate, the gains made in the southeastern region of the state was often trumpeted throughout Friday night.

State Rep. Margo Davidson (D-Delaware), House Democratic Southeast Delegation Chairwoman, centered her speech around breaking barriers, but clearly laid the blame at the President for a number of the issues facing various communities.

“Breaking barriers is not easy, but we have to break barriers anyway,” Davidson said, referring to women and others being elected to office.

The lone speaker of the evening who did not address Trump by name, but pleaded with everyone in attendance to help women candidates was state Sen. Lindsey Williams (D-Allegheny).

“I’m a union woman raised in a union household,” Williams said. “They (her family) taught me we are stronger together, long before it was Hillary Clinton’s campaign slogan.”

She asked everyone in attendance to donate even just $5 to a campaign of a woman candidate they believe in.

Blake named a number of Democratic elected women in positions of leadership across the country and thinks the party will only benefit if that is continued. He said multiple times to “never doubt our women” and echoed this sentiment, while detailing that allegations from women should be believed.

“Don’t be silent and never doubt our women,” Blake said. “So that means when a woman says that they have been assaulted, stop questioning them. Believe them.”

Neither Blake nor any of the speakers mentioned state Sen Daylin Leach (D-Montgomery), who presents the party and his caucus with a test of their “believe women” mantra.

Leach has been accused of multiple allegations of impropriety, including of sexual assault, was recently asked by his county party, in addition to calls from Gov. Tom Wolf and Lt. Gov. John Fetterman, to resign from office. The Senate Democrats have launched an investigation into the recent sexual assault investigation. Leach has denied these allegations and responded with a defamation suit against the accuser.

Blake, who described himself as a feminist, lauded the work of Democratic women today and in the past, but also noted the work of New Zealand Prime Minister Jacinda Ardern and her response to the recent terrorist attack in Christchurch, at Al Noor mosque and the Linwood Islamic centre, that resulted in at least 50 deaths.

“I don’t know about you,” Blake said. “But I would trade the prime minister for our President in a second.”

The party remained rather united throughout the weekend, although a member of Bradford County voiced his concern that the party didn’t have Pennsylvania 12th Congressional candidate, Marc Friedenberg address the dinner. State Chair Nancy Patton Mills explained that none of the candidates for office spoke, which included candidate for the 41st state Senate district Susan Boser, who was in attendance, and she looks forward to having him address the crowd if he is elected in the upcoming special election on May 21.

It was also mentioned on the floor today that the DNC is considering Pittsburgh as a location to host one of the Democratic primary debates.