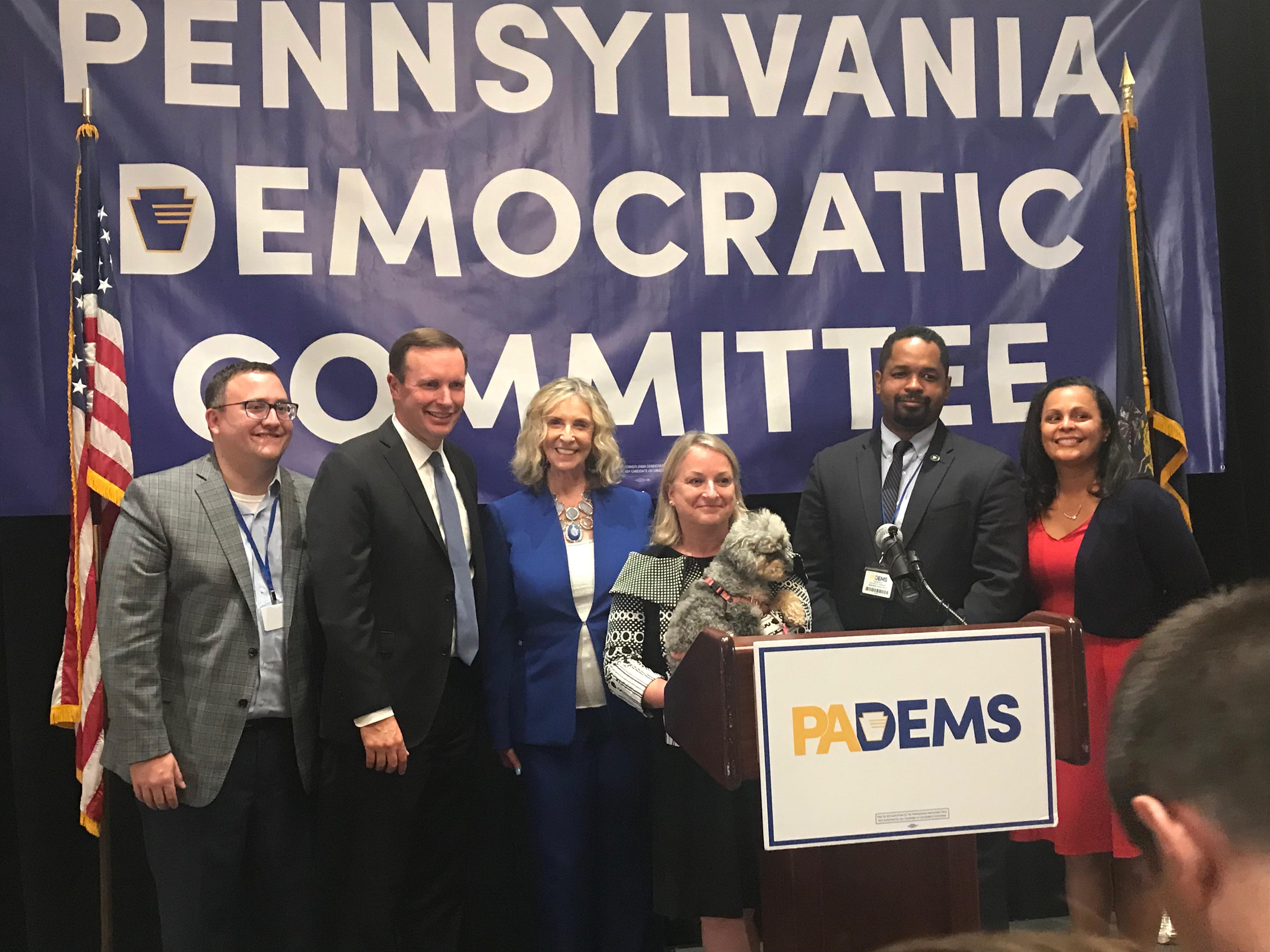 HARRISBURG- Although the 2020 presidential election is a little over one year away, Democrats and Republicans alike already have been jockeying for support in Pennsylvania, which is being seen as one of the few states that holds the keys to the White House.

At the Pennsylvania Democratic Party Fall dinner, they stressed this message and believe they are up to the challenge to flip the state back in the win column after President Donald Trump won here in 2016.

“You’ve got the weight of your world on your shoulders, Pennsylvania,” Sen. Chris Murphy (D-CT) said, who was the keynote speaker for the Friday night gathering at the Sheraton Hotel in Harrisburg. “There are not many places in the country that have the opportunity to have so much say over it as you do here in Pennsylvania.”

The message shared from various officials on Friday night was that the state party was going to continue to build off of the momentum from the 2018 midterms, which saw pickups in Congress, the state House and state Senate, although they remain in the minority in Harrisburg, and double digit victories for Gov. Tom Wolf and Sen. Bob Casey.

Rep. Susan Wild (D-Lehigh), who successfully flipped one of the swing districts in the state in 2018, said that those looking for where the presidency will be won need to look no further than her district.

“This is the only thing you need to know for next year,” Wild said. “The Trump campaign has figured out that the only way to carry Pennsylvania is to carry the Lehigh Valley. And we can’t let him to do it.”

Wild bested GOP candidate Marty Nothstein in 2018 in the newly drawn open seat in the 7th District by 10 points. These boundaries narrowly voted for Sec. Hillary Clinton over Trump in the 2016 election. Wild is also one of three Democrats in the state being targeted by the National Republican Campaign Committee in 2020 as priority seats.

A number of 2020 Democratic presidential hopefuls, including frontrunners former Vice President Joe Biden, Sens. Elizabeth Warren (D-MA) and Bernie Sanders (I-VT), have made campaign visits in the keystone state, but have yet to hold a rally in the Lehigh Valley.

“I’ve actually gotten three phone calls from Democratic nominees for President asking me for my endorsement, but none of them have come to my district yet,” Wild said. “My answer is if you don’t come to Pennsylvania’s 7th [District] you’re missing the boat.”

“You must come to Pennsylvania 7, which is the swing district in the swing state,” she continued. 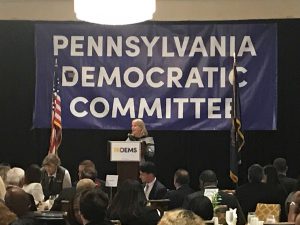 Wild did not specifically say which candidates in the crowded field called to seek her endorsement. Sen. Bob Casey and Reps. Brendan Boyle (D-Philadelphia), Matt Cartwright (D-Lackawanna), and Dwight Evans (D-Philadelphia) all formally endorsed Biden shortly after he joined the race, while Rep. Conor Lamb has publicly stated he is supporting Biden as well. No other member of the Pennsylvania Democratic Congressional delegation has issued an endorsement for president thus far.

The lone Democratic candidate to make an appearance in the Lehigh Valley thus far was Sanders, who participated in a Fox News Townhall in Bethlehem in April, while visits in the state from others seeking the nomination include stops in Philadelphia, Pittsburgh, and State College.

While the Democratic primary plays out, pundits and politicos have been keying in on the differences between those seeking the nomination, but Murphy wanted to emphasize that there is much more that unites the party than divides.

“You know that the focus is constantly these days on what divides Democrats,” Murphy said. “These relatively small differentiations that we have on issues from healthcare to guns to immigration, I’m just going to tell you, I’m just going to preview you, that’s going to continue.”

“I want to make sure tonight that we understand that no matter these small differences, there are really really simple ideas that bind us together as Democrats and separate us from Republicans,” Murphy continued.

One of the key uniting policy issues that the Democratic Party has championed, and what Murphy is largely known for on the national stage, is the push for background checks and other gun control legislation.

Murphy acknowledged that attempting to reform gun laws in the country is one of the reasons he is in office and has supported candidates across the country who share this belief, including his NR8 campaign during the 2018 election which attempted to raise $1 million in 24 hours for 8 candidates running for Congress on supporting these reforms, which included Wild.

Murphy, who said he spoke on the phone to the president last week pushing these reforms, believes progress is being made on the issue and offered strong criticism for those who aren’t speaking out on gun violence.

“Because at the core of my public service… has been my belief that legislators who remain silent, doing nothing, in the face of this mass slaughter of innocence by guns that is happening in this country, that those people are complicit in those crimes,” Murphy said. “Silence is not an option.” 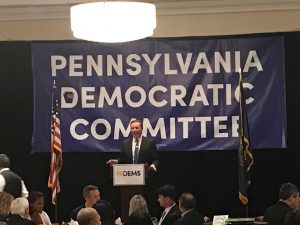 Murphy lauded the Pennsylvania Democratic delegation for voting in favor of a background check bill and said he thinks that change is the current laws is very possible.

In addition to speaking about gun control policies, Murphy, Wild and other Democrats said that their platform, including making healthcare a human right, moving the minimum wage to $15 an hour, supporting unions, advocating for a woman’s right to choose, criminal justice reform, and more will help put them over the top in 2020.

Policy differences aside, the ultimate uniter within the Democratic Party is Trump.

One of the current conversations that has caused Democrats from across the country to rally around is the reported phone conversation that Trump held with Ukranian President Volodymyr Zelenskiy urging him to look into Biden’s son’s business dealings in the country. Trump fired off a tweet on Friday morning, rejecting the notion that he did anything wrong and that the “Radical Left Democrats and their Fake News Media partners …are at it again!” and that “there was nothing said wrong, it was pitch perfect!”

Murphy addressed this report at the dinner and accused Trump of “begging” Zelenskiy to “interfere in an American election.”

“The gaul that it takes to do that in general is extraordinary, but to do with right after an investigation that concluded another country interfered into an American elections tells you the degree of impunity that our President thinks that he operates under and also tells you how fundamentally fragile our democracy is and how hard we have to fight for it,” Murphy said.

Trump’s name was even tied into the race for Superior Court this November during the meeting.

“If Donald Trump has taught us anything, it’s that our court systems are critical to ensuring our battle to government,” state Rep. Austin Davis (D-Allegheny) said, while urging dinner goers to vote for Philadelphia Court of Common Pleas Judge Dan McCaffery and former Allegheny County Councilwoman Amanda Green-Hawkins.

One of the loudest responses from Davis’s speech Friday evening was when he referenced House Speaker Mike Turzai’s recent exchange over school funding with protesters outside of Harrisburg Catholic Elementary School when he touted the investments in public education made while he has been Speaker and referred to those opposing “school choice” programs as “special interests people” who “don’t really care about the kids.” The exchange was when Turzai joined Education Secretary Betsy DeVos at the school promoting “school choice.”

“Just yesterday when we were in session, the Speaker referred to public schools as a monopoly,” Davis said, followed by boos. “And to public school teachers as special interest. Nobody who shares that mindframe deserves to hold an elected office and especially one in Pennsylvania.”

With the focus of winning a wide variety of seats in Harrisburg and attempting to carry the state for the presidential nominee in 2020, it provides a lot of effort from the state party, but they believe their success in 2018 shows that they are up for the fight.

“We are so pleased that we are able to be ground zero for 2020,” Pennsylvania Democratic Party Chair Nancy Patton Mills said. “We understand that responsibility. We understand what it takes to be successful and we’ve proved that here in Pennsylvania.”