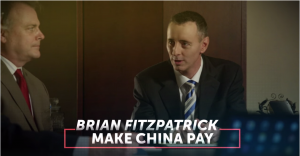 The race for the 1st Congressional District goes to television.

Rep. Brian Fitzpatrick (R-Bucks) released his first television ad of the GOP primary race. The 30 second spot, “Take Back,” points the blame on China for the spread of COVID-19 in the United States and boasts that Fitzpatrick is working to ensure that they “pay for the damages caused by coronavirus.”

“For decades, China has been stealing our jobs,” a voiceover reads at the beginning of the ad. “Now, they are trying to steal our future.”

“But Brian Fitzpatrick is fighting to make China pay for the damage caused by coronavirus and working to bring production of critical medical equipment back home, controlling our own destiny, putting our own people back to work,” the voiceover continues to say in the spot. “Brian Fitzpatrick is taking on China and taking back our future.”

The ad ends with a voiceover of Fitzpatrick saying that he approves of the message.

According to a spokesperson from the Fitzpatrick campaign, the television ad first aired on May 19 and will be running for a total of two weeks. The campaign added that it is a five figure ad buy.

The ad also mirrors a national GOP messaging strategy to point the finger at China for the coronavirus pandemic, while not detailing the Trump administration’s response to the virus.

This ad has resulted in public pushback from at least one of his challengers for the seat in the Philadelphia suburbs. Christina Finello, an Ivyland Borough Councilwoman who has been endorsed by the Bucks County Democratic Party, wrote a lengthy Facebook post on Saturday saying that Fitzpatrick is attempting to “deflect blame” for the coronavirus pandemic away from President Donald Trump’s administration.

“My Republican opponent, Congressman Brian Fitzpatrick, is running an ad on FOX News in an attempt to deflect blame for this crisis from the Trump administration, to China. The fact of the matter is, Republicans in Washington aren’t stepping up to the plate to keep working people and small businesses safe,” Finello wrote on the Facebook post.

She continues to link Fitzpatrick to Trump in the same Facebook post by accusing the incumbent Republican of “cozying up to the Trump administration,” and cites him meeting with Trump during his visit to the Lehigh Valley and criticizes his vote against a coronavirus relief package.

Fitzpatrick has not issued an endorsement of Trump for president yet, while the rest of the state’s GOP delegation have been vocal in their support for Trump’s reelection bid.

Skylar Hurwitz, a technology entrepreneur and small business owner who has been endorsed by Our Revolution Pennsylvania who is seeking the Democratic Party nod, and Andrew Meehan, a pro-Trump Republican and financial advisor challenging Fitzpatrick in the GOP primary, have not shared their thoughts on Fitzpatrick’s ad on social media.