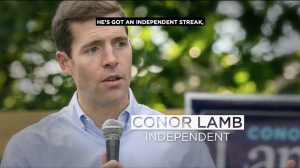 As Pennsylvania’s 17th Congressional District is shaping up to be one of the key battlegrounds for the upcoming election, Rep. Conor Lamb’s (D-Allegheny) first television ad promotes the incumbent congressman working across the aisle in office.

“He’s got an independent streak, just like western Pennsylvania,” a voiceover says in the beginning of the 30 second spot that was released on Wednesday. “Learned the meaning of service in the Marine Corps and as a prosecutor. That’s why Conor Lamb has worked with both parties to get things done.”

The ad continues to boost Lamb’s support for “strengthening trade deals,” coronavirus relief funding, and energy jobs in his district.

“Strengthening our trade deals to support American workers, delivering virus relief funds to families and small businesses, and standing up to his own party to protect Pennsylvania energy jobs,” the voiceover says. “Conor Lamb fights for what’s right. Always has, always will.”

RT to help spread the word, & chip in to help us keep it on the air: https://t.co/8VKhzsWUv2 pic.twitter.com/UWPPx5Dzpk

GOP challenger Sean Parnell, a combat veteran and conservative author, disputed the claims in a press release calling the ad a “doozy” that is “filled with lies.”

The Parnell campaign cited a ProPublica and FiveThirtyEight analysis that said Lamb voted with the Democratic Party 94% of the time and voted in line with President Donald Trump’s position 8.8% of the time during the 116th Congress. They also link Lamb to the “job-killing Green New Deal” for endorsing former Vice President Joe Biden’s campaign. Despite the press release claiming that Biden is backing the Green New Deal, the Democratic presidential nominee and Lamb have said they do not support it. Lamb previously served on a climate change panel this past summer that provided recommendations for the Democratic Party platform.

While this is Lamb’s first TV ad of the cycle, Parnell’s campaign previously launched two TV spots for the general election. The GOP challenger’s first ad celebrated the return of the Pittsburgh Penguins, while he went on the attack in his second ad by highlighting a tweet from Lamb’s (D-Allegheny) spokesperson and brother about Parnell.

The Cook Political Report, Inside Elections, and Larry Sabato’s Crystal Ball all have the race in PA17 as “Likely Democratic.”