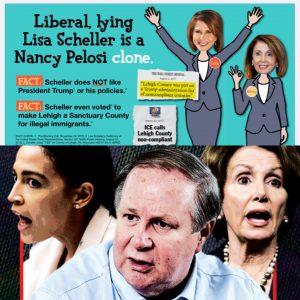 The GOP candidates fighting an ad war in the Lehigh Valley agree on one thing: their opponent is too liberal.

They have claimed the conservative, pro-Trump mantle in the hotly contested June 2 primary for the 7th district. The winner will face first-term incumbent Dem Susan Wild. Both candidates, Lisa Scheller and Dean Browning, are former Lehigh County Commissioners and businesspeople.

Scheller has been named a Young Gun by the NRCC and is endorsed by House Minority Leader Kevin McCarthy (R-CA). She sent out a flurry of attacks on Browning on television, radio, and mailers. The most common theme in each is a Browning tax vote while he served on the Lehigh County Board of Commissioners. Others paint him as “anti-gun,” and still others bring up a sexual assault lawsuit in which Browning was named.

Starting on television, Scheller released a 30 second spot called, “Proven Tax Cutter,” that aims at drawing a wedge between the two candidates on taxes.

“On the Lehigh County Commission, Dean Browning sided with liberal Democrats and cast the deciding vote for a $16 million tax hike,” a voiceover reads at the beginning of the ad. “Dean Browning has been too liberal for too long.”

The rest of the ad describes Scheller as a “conservative business owner” who passed permanent tax cuts as a member of the board of commissioners and the candidate who will “stand with President Trump to rebuild our economy.”

Browning’s campaign is also on television with a 30 second ad slamming Scheller as a “liberal” who is “another pro-China, anti-Trump, fake conservative,” while describing himself as the “only Trump Republican,” in the race.

“Liberal Lisa Scheller got rich shipping jobs to China, ran away from President Trump, and even voted to make Lehigh County a sanctuary for illegal immigrants,” a voiceover in the ad says. “Don’t be fooled.”

The rest of the spot says that Browning is “100% pro-life, pro-gun conservative,” and addes that Browning will “help” Trump “drain the swamp, build the wall, and hold China accountable.”

Browning vehemently denies the tax claim, although the Allentown Morning Call reports that there is some gray area to the tax vote dispute: “Browning never voted for the tax increase itself, but he voted against two proposals at that October 2010 meeting that resulted in the eventual tax hike.”

He also dismissed the claim in a Scheller radio ad that he, “supports Nancy Pelosi’s gun control agenda that would allow federal bureaucrats to access our private medical records.” It stems from a 2018 debate question about mass shootings.

“I have been a life member of the NRA since 1998.  I have an ‘A’ rating from them and I have been recommended by Firearms Owners Against Crime,” Browning said. FOAC is a Pa. gun rights group that is more conservative than the NRA. “My answer was consistent with the NRA’s position that most mass shootings involve someone with severe mental illness and that we need to take steps to make sure that those that have been adjudicated to be a danger to themselves or others do not have access to firearms while according them due process protection.” 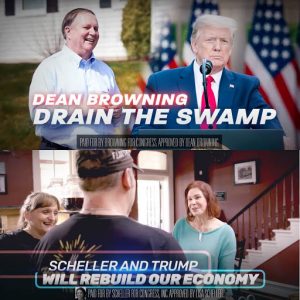 The Scheller campaign shrugged off the anti-Trump attack as “baseless” and claimed that Browning is a “wannabe career politician.”

“We have no intention of responding to the baseless attacks of a wannabe career politician who’s only claim to fame is siding with Democrats to hike taxes by $16 million during his only time in elected office (notwithstanding his countless failures at the ballot box),” said Ryan Reynolds, Scheller campaign Spokesman.

Scheller also accuses Browning of contributing to a “hostile work environment.” The claim is based on a 2018 lawsuit filed by a former employee at theAllentown Rescue Mission, where he served as Treasurer. The suit alleged: “discrimination against women by questioning their ability to lead, demoting and firing women while promoting men, and disciplining one female employee for suggesting the organization needed more diversity,” according to the Allentown Morning Call, and names Browning as one of three execs who took part.

A Morning Call article from September 2018 quotes Michael Carr, the attorney for the Mission. He said that the claims made by the accuser were “similar” to the ones raised by her to the “federal Equal Employment Opportunities Commission and the Pennsylvania Human Relations Commission, which were denied.”

Browning added in a statement that the employee was was let go was replaced by a woman and claimed that he had “limited interaction with the employee who was let go and interacted with her mostly at bi-monthly Board meetings.”

Both GOP candidates have materials that picture their opponent with House Speaker Nancy Pelosi.

The Scheller campaign told PoliticsPA that the television and radio ads currently up right now are not the first of the campaign, but these specific ads will be up through the end of the election. They described the total TV, mail, and radio ad buy as a “strong six figure effort.”

The television spot from the Browning campaign, which launched on May 14 and will run through the primary, is the first and only ad that he will be running during the primary. The Browning campaign said that the total TV ad buy is in the low five figures including production, approximately $30,000.

Browning said that he launched the mail campaign, which was launched on April 30, is in the low six figures, approximately $130,000.