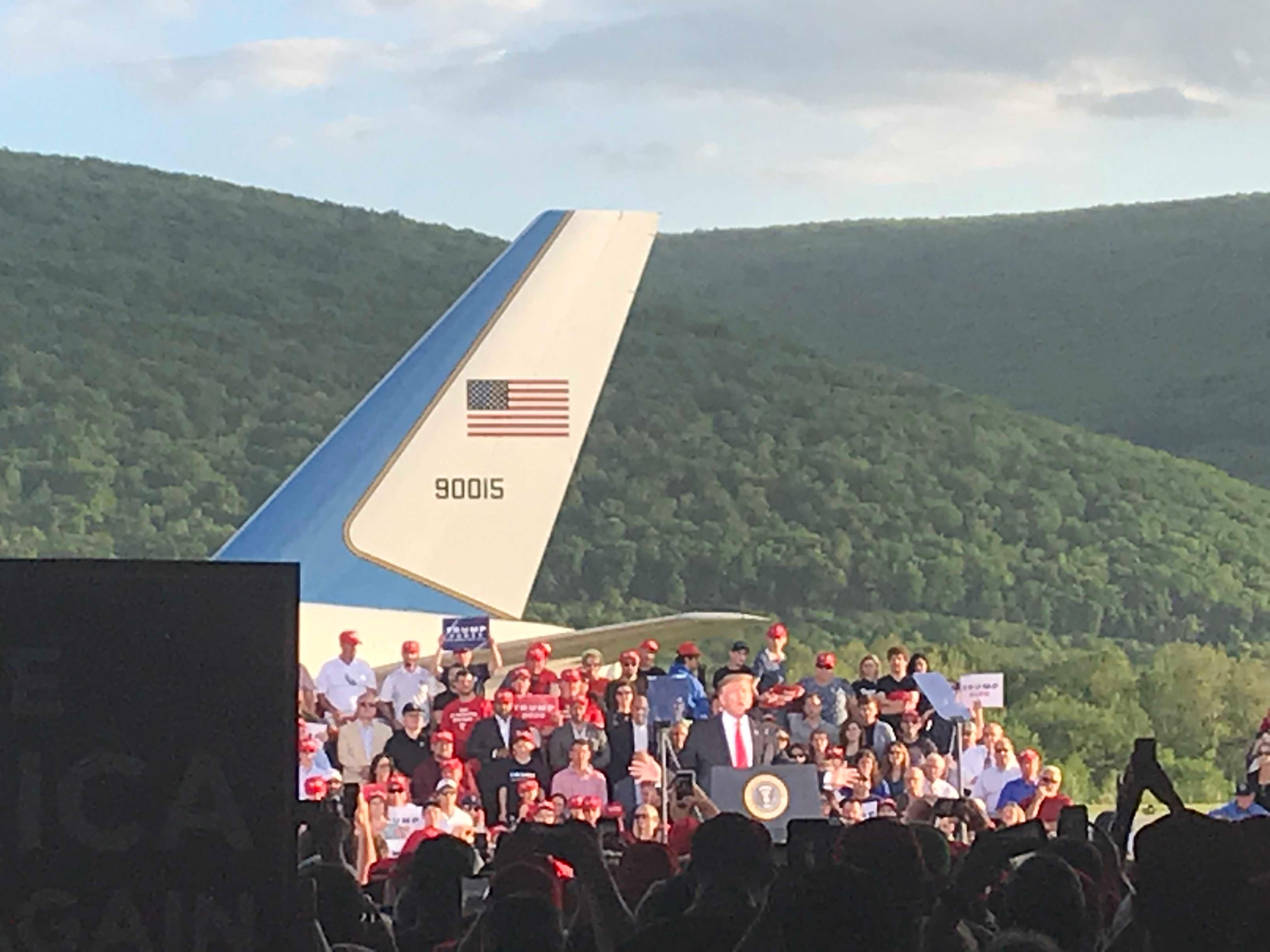 MONTOURSVILLE- One day before a Congressional special election, the President goes to rally the base.

In one of the most conservative regions in the state, President Donald Trump centered an address around speaking of the ills of free trade and the need for increased border security while boosting state Rep. Fred Keller’s bid for Congress in the 12th District.

“Under my administration, we’re reversing years of bad trade policies that crushed Pennsylvania’s middle class,” Trump said. “You know that better than anybody. It is disgraceful what they did to the workers.”

Trump’s opposition to free trade and embracement of tariffs has set himself apart from many in the Republican Party, but is also perceived to have helped him secure rustbelt states like Pennsylvania in the 2016 election.

Trump still faces heat from some in the GOP for his opposition to free trade, including Sen. Pat Toomey, but defended his record thus far on the issue and offered a solution to those who are unwilling to pay the tariffs.

“We are finally responding to years of chronic trade abuses by defending our workers with tariffs and anything else that’s necessary,” Trump said. “Anyone who doesn’t want to pay the tariff has a simple solution: build your product in America, bring your factories back to Pennsylvania.”

Trump touted the current state of the economy as proof that his policies are effective and credited his opposition to NAFTA and the Trans Pacific Partnership, which is widely popular among conservatives, to helping Pennsylvania’s middle class.

“Upon my inauguration, I inherited one of the worst trade deals ever negotiated, it was ready to be put into action, the Trans Pacific Partnership would have destroyed the state of Pennsylvania,” Trump said. “The TPP would’ve been a catastrophe for the people of Scranton and Allentown and Pittsburgh.”

He also called NAFTA a “disaster.”

Trump’s words on those economic policies were well received at the Energy Aviation Hangar, but it wouldn’t have been a true Trump rally without talking about building the wall.

He talked about his belief that building a border wall is the only effective way to curb illegal immigration and how he thinks his administration is not being treated fairly on the topic.

“If we sat down for fifteen minutes, we could stop up that border so perfectly,” Trump continued. “The laws and the judges are so against us, it’s actually incredible, but we’re going to win.”

Trump’s first rally in the state for 2019 was in part to assist the Republican candidate who is vying to hold a seat in a heavy GOP district. The seat, previously occupied by former Rep. Tom Marino (R-Lycoming), is being sought by state Rep. Fred Keller (R-Snyder) and Democrat Marc Friedenberg.

Although Trump didn’t spend too much time talking about the specific race, he did laud Keller for being tough on crime and supporting a number of conservative positions while painting his opponent as a socialist.

Keller joined Trump on stage for a few minutes and said the President’s support was strong in the district, that did vote for Trump by over 35 points in 2016.

“The people of Northeastern and North Central Pennsylvania have been behind you since day one,” Keller said. “And Mr. President, our support for you is as strong today as it ever was.”

Trump described the race as a “little bit of a referendum” on him and said if Keller wins, the media won’t report on it, but if he loses it’ll be the “greatest story in the history of our country” in the eyes of the media.

Marino most recently won his bid in this district in November 2018 by 32 points over Friedenberg.

Trump asked if there were other big races tomorrow, but referenced Keller’s being the most important in the state. Just hours after the rally concluded, Trump tweeted out his support for Superior Court candidate Megan King.

Although the 12th District race between Friedenberg and Keller has not captured many national headlines, the presidential race is heating up in the state and Trump acknowledged the current Democratic frontrunner by name several times in his hour long address.

Former Vice President Joe Biden held his “campaign kickoff rally” in Philadelphia this past Saturday taking direct shots at Trump’s policies on a wide range of issues and questioning his character, including saying Trump inherited the economy from the previous administration and inherited his wealth.

Trump punched back at “Sleepy Joe” and painted him as a candidate not holding the American workers best interest in mind.

“Sleepy Joe said that he’s running to quote save the world,” Trump said. “Well he was, he’s just going to save every country, but ours.”

“He announced that he’s running for President and he said it’s because foreign leaders called him up and begged him to do it,” Trump continued. “They want Biden so that China can continue to make 500 billion dollars a year and more ripping off the United States.”

The only other 2020 Democratic hopeful he mentioned during his address was Sen. Bernie Sanders and South Bend Mayor Pete Buttigieg, who he referred to as “Alfred Neuman”.

His son, Donald Trump Jr., who spoke before his arrival, struck a different tone to rile up the base.

He spent a great deal of his 40 minute address tapping into various social topics to get a rise out of the crowd.

“Imagine chanting USA at a Democrat Rally,” Trump Jr. said as he walked on the stage. “They’d throw you out on your ass.”

Trump Jr., bemoaned about his belief that conservatives are being discriminated on social media and that he thinks PC culture pushed by Democrats is hurting the country. He used the recent Jussie Smollett story as an example to his case.

“You mean to tell me in downtown Chicago at 2 AM two white guys wearing MAGA hats, I go first and foremost you wouldn’t last 15 seconds before getting shot,” Trump Jr said. “I got a lot of hell for that one too, but it’s true.”

He also blamed the media and special Counsel Robert Mueller for trying to impede progress in his father’s administration.

“I remember about three weeks ago when Mueller was the second coming of Christ for the Democrats,” Trump Jr said. “Not that they believe in Christ, but you understand what I mean.”

Trump Jr. headlined a GOP state committee meeting in the fall prior to the midterms, which saw double digit losses for two Trump friendly candidates for statewide office. He also talked about the loyalty he received from Marino and former Rep. Lou Barletta (R-Luzerne), who spoke before him, and thanked them for their early support of Trump.

“They were supporters and they were loyal when it didn’t pay to be loyal,” Trump Jr said. “You understand the difference.”

Piggybacking on loyalty later in his speech, he recalled a conversation he had with his father the day he officially announced his candidacy for President in 2015.

“Now, we find out who our real friends are,” Trump Jr said his father told him. “Truer words have never been spoken.”

A new poll from Quinnipiac University shows that Trump is trailing both Vice President Joe Biden and Sen. Bernie Sanders in a hypothetical 2020 head to head matchup in Pennsylvania outside of the margin of error.

PA GOP Chair Val DiGiorgio said he doesn’t take much stock in this polling and thinks with the current state of the economy that Trump will win the state again.

“I don’t know how much stock I’m putting in polling either way, whether we’re up or down,” DiGiorgio said. “In 2016, every poll had the President down, some by double digits with 2 weeks out from the election.”

“I don’t see how the President doesn’t carry PA,” he continued.

The Pennsylvania Democratic Party issued a statement on Trump’s rally saying his policies are harmful to a number of groups and accused Keller of being a rubber stamp for him.

“Donald Trump’s policies are harming Pennsylvania’s farmers, families, and workers every day, and Fred Keller will be a rubber stamp for these disastrous policies in Washington,” PA Democratic Party Chair Nancy Patton Mills said in a statement. “Pennsylvanians need lawmakers who will defend farmers from tariffs, ensure health care protections for all, and uphold the rights that workers deserve.”