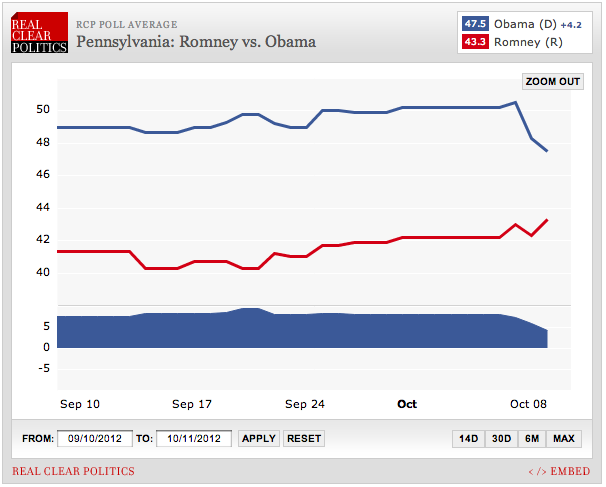 We’ve got our hands on an exclusive internal poll of the presidential and Senate races in Pa. The DCCC cuts back in PA-8, but Boockvar raised $500K+ and is on TV again. And there’s lots of action in the state House & Senate races. Good morning politicos, here’s the Buzz.

Rasmussen Poll: 7 Point Romney Post-Debate Pa. Bump: Mitt Romney has bounced back from a Pa. low according to the latest poll from Rasmussen. He trails President Obama by 5 points, 51 percent to 46. But that’s a 7 point jump for Romney since’ Rasmussen’s previous Pa. poll, taken in mid-September.

Susquehanna Poll: Casey 46, Smith 44: The latest survey from Susquehanna Polling and Research shows the smallest margin yet of the race for U.S. Senate in Pa. Republican Tom Smith trails Sen. Bob Casey by just 2 points, 46 percent to 44, and the race is within the poll’s margin of error.

DCCC Yanks Air Support to Boockvar: Kathy Boockvar will have a lot less help in her challenge to Rep. Mike Fitzpatrick. The Democratic Congressional Campaign Committee has cancelled almost $600K in television ads that would have boosted her in the second-to-last week of the campaign.

Boockvar Ad Goes All Out for Women’s Issue Message (Watch Video): A new ad from Democrat Kathy Boockvar’s campaign says that Rep. Mike Fitzpatrick has chosen the wrong side in the so-called “War on Women.” Fitzpatrick also unveiled a new ad on Wednesday, a heartstrings spot about Fitzpatrick’s effort to help a family whose tragic loss was compounded by red tape.

Perry, Eyes on DC, Stumps with Cantor: The odds are that Scott Perry will be a Congressman as long as he wants to. It comes as no surprise that he’s getting attention from national GOP bigwigs like House Majority Leader Eric Cantor, who keynoted a fundraiser for Perry Tuesday night.

Now that Voter ID is on hold for 2012, Capitolwire takes a look at some of the races that could be impacted by Latino or African American populations upset about the law. Included are the re-elects of Reps. John Taylor (R-Phila) and Tarah Toohil (R-Luzerne), where Latino populations are high but politically apathetic; and the open seats in Erie (HD-3 and SD-49) and Harrisburg (SD-15) where Voter ID outrage may inoculate African American turnout against any enthusiasm gap.

SD-15, 37, 47 & 49: Dem state Senate candidates in 4 races will get a boost from Sen. Vincent Hughes and his wife Sheryl Lee Ralph, the actress who portrayed one of the original Dreamgirls on Broadway and played the mom on ‘Moesha’. The tour is aimed at boosting African American support for Rob Teplitz, Matt Smith, Kim Villella and Sean Wiley.

SD-37: Capitolwire’s Pete DeCoursey absolutely takes apart Rep. Matt Smith over a pension flip flop. Smith promised not to take a pension for 2007 and 2008. But after winning re-election in 2008, he retroactively signed up for a pension that covered 2007 and 2008. The flip is the subject of a new attack ad from Raja, Smith’s GOP opponent in the race to replace ex-Sen. John Pippy.

SD-47: George Bush, Dick Cheney, Tom Corbett and Mitt Romney all make a cameo in Kim Villella’s new ad. It slams incumbent Sen. Elder Vogel (R-Beaver) for voting the party line 98 percent of the time. Meanwhile, Vogel’s up with an ad about his ties to Beaver County.

SD-49: Want to support Janet Anderson? There’s an app for that. The Republican vying to replace outgoing Sen. Jane Earll (R-Erie) launched a nifty campaign smartphone app, making her the first Pa. legislative candidate to do that, that we’ve heard of. “I have made it a priority to be accessible to everyone in Erie County and I hope that people will utilize my app to get the latest information regarding upcoming events and where I stand on the issues,” said Anderson.

HD-44: Rep. Mark Mustio is polling negative messages to use against his opponent. So says Democrat Mark Scappe, past President of the Moon Area School District Board of Directors and Chair of the Moon Transportation Authority who is running against Mustio. “Voters in the 44th Legislative District have been receiving calls from Mr. Mustio’s pollsters testing negative messages for the purposes of attacking our candidate with negative direct mail and misleading advertising,” said Jessica McCurdy, spokesperson for the Scappe campaign.

HD-89: Dem Susan Spicka held her 3rd issues forum, this one on education. The former teacher and Democrat is running against Rep. Rob Kauffman (R-Franklin). She blasted him for his support of GOP budgets and vouchers.

HD-131: Rep. Justin Simmons (R-Lehigh) appears to be on a roll against Dem public school teacher Kevin Deely. He picked up the endorsement of the Easton Express-Times, launched a new TV ad, and by one account (with video), he cleaned up at a debate Monday night. He looks like he’d have given Mitt Romney a run for his money on the debate stage. It’s schedule to broadcast on WFMZ on Oct. 22.

HD-149: Ed Rendell will be the featured guest at a fundraiser for Rep. Tim Briggs (D-Montco) in Wynnewood on Oct. 20. “Of everyone in Harrisburg…one thing is for sure.Tim Briggs is not a WUSS!  He always stands strong for what’s right!” Rendell said. He faces Republican Perrin Hamilton.

Opinions
Sun Gazette: Given the state of the economy, we must reconsider public benefits
Pittsburgh Post-Gazette: Diplomat Romney: He calls for a bigger U.S. role in the Middle East