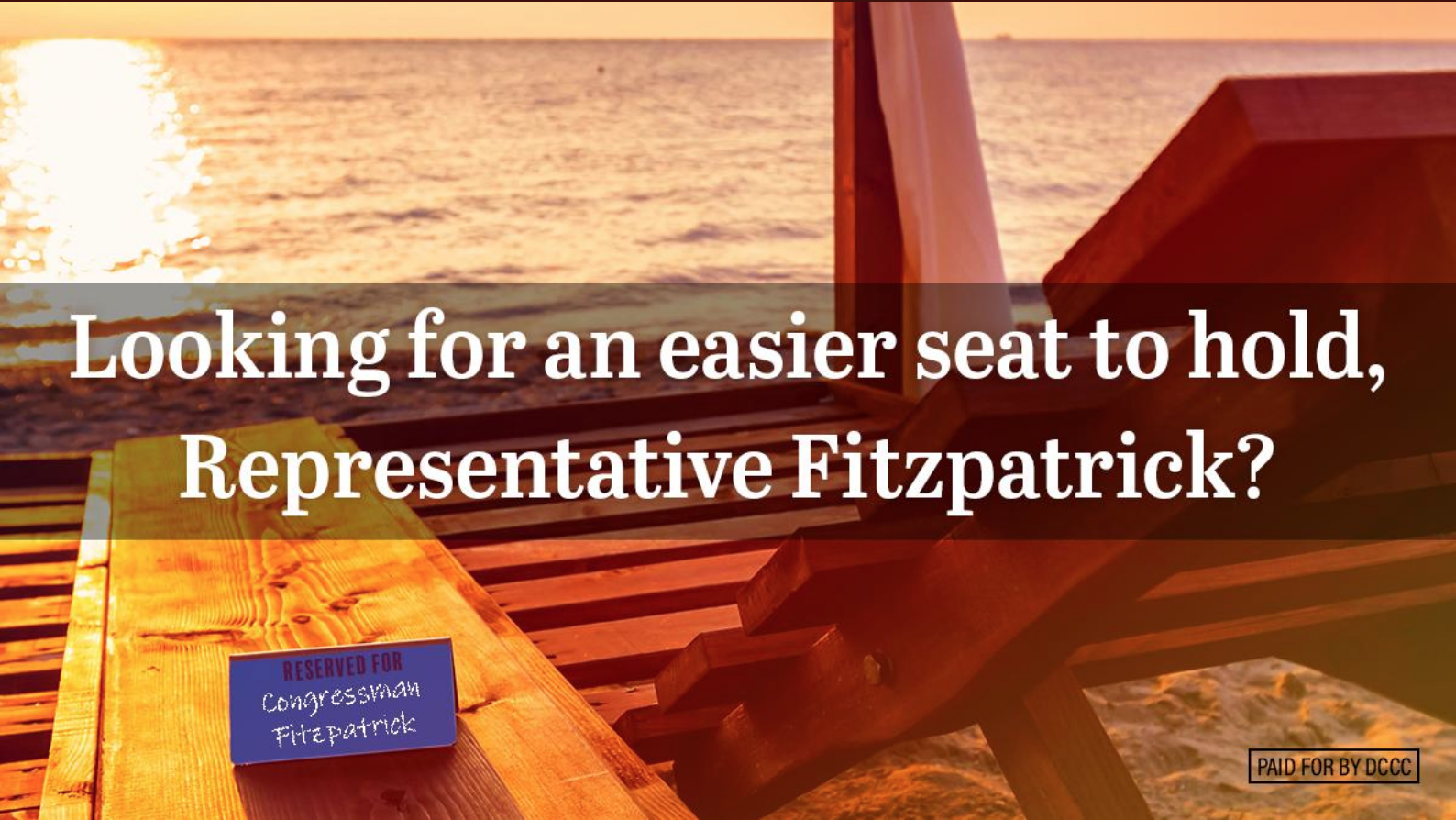 The Democratic Congressional Campaign Committee has battled Fitzpatricks in the Philadelphia suburbs for the better part of two decades. Six out of seven times, they’ve come up short. The 2018 candidacy of Scott Wallace was as close as Democrats got since former Rep. Patrick Murphy ousted former Rep. Mike Fitzpatrick in 2006.

This week, the DCCC tried a novel approach: encouraging two-term Rep. Brian Fitzpatrick to retire. As suburban districts around the country shift away from the Republican Party under President Donald Trump, the committee launched social media ads in the Bucks-based first district.

It’s tough to be a Republican in Washington right now. Will @BrianFitzUSA be the next Republican to head for the door? We wouldn’t be at all surprised — so we put him on our 2020 Retirement Watch List. pic.twitter.com/y4PTr64KN1

“Republicans in Washington know their health care repeal agenda is historically unpopular, and instead of running yet another tough campaign for the next 15 months they’re heading for the exits,” said DCCC spokesperson Mike Gwin. “Frankly, you can’t blame them and these ads serve to remind Congressman Fitzpatrick of the better life so many of their colleagues are choosing, rather than return to life in the minority in Washington.”

Fitzpatrick was added to the DCCC’s “Retirement Watch List” last week after 7 Republicans in Congress announced they were retiring in the span of two weeks. The website FiveThirtyEight listed him as a “possible retiree.” Fitzpatrick has told the Bucks County Courier Times that he plans on seeking a third term in Congress. And he’s been raising the money to do it: his $812,000 at the end of July was ahead of his cash on hand at this point last cycle.

Like his brother, Rep. Fitzpatrick has walked a fine line to distance himself from the national GOP brand. He has consistently broken party ranks, voting with Democrats against repealing the ACA in 2017, condemning Trump’s tweet telling four Democratic women of color in Congress to “go home,” supporting HR 5, which addressed banning discrimination against LGBT people, and voting to reauthorize the Violence Against Women Act.

However, Fitzpatrick has lined up with Trump and the GOP on some high-profile issues, like his support for the tax reform bill, his vote against holding Attorney General William Barr and Secretary of Commerce Wilbur L. Ross, Jr. in contempt of Congress for not complying with subpoenas authorized by the Oversight Committee relating to the 2020 census, and his vote against proceeding with articles of impeachment against Trump.

The National Republican Congressional Committee said that Fitzpatrick will win his next reelection bid and said the ad buy was a waste of money.

“It’s highly entertaining watching the socialist Democrats waste their money begging like a dog for Brian Fitzpatrick to retire,” said NRCC Spokesman Michael McAdams. “Unfortunately for them, Rep. Fitzpatrick will run and will win, yet again.”

After defeating Wallace by just over 2.5 points in November 2018 in boundaries that narrowly went to Sec. Hillary Clinton, Fitzpatrick has moved even more to the middle. A Roll Call story in early June showed that Fitzpatrick experienced a 16.6 point decline in party unity score during this session of Congress at that point in time compared to the previous term.

The DCCC said the ad buy was in the four digit range, indicating more of a play at the media narrative than broader voter persuasion.