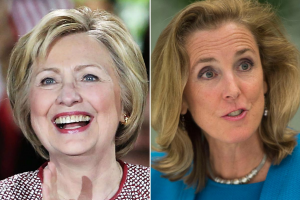 The Democrats are confident and they’re aiming to make an impact in down-ballot races.

That’s what Ruby Cramer of Buzzfeed is reporting.

Clinton first employed this strategy over the weekend during joint appearances with Tim Kaine in Pittsburgh and Philadelphia.

“And we’re going to need help doing that after the election, and that’s why I hope you will do everything you can to elect Katie McGinty your next senator,” Clinton began.

While in Pittsburgh, the Democratic nominee didn’t limit herself to just praising her party’s candidate, though, she also criticized Sen. Pat Toomey. This was her first attack against a Republican down-ballot candidate this cycle.

“And I think it’s pretty clear, when you look at Katie’s opponent. He still refuses to stand up to Donald Trump,” she continued. “Now, a lot of Republicans have. They have had the grit and the guts to stand up and say, ‘He does not represent me.’ But Pat Toomey heard Donald attack a grieving Gold Star family who lost their son in Iraq. He heard Donald call Mexican immigrants rapists. He heard him say terrible things about women. He heard him spread the lie that our first black President wasn’t really born in America. Now, how much more does Pat Toomey need to hear? If he doesn’t have the courage to stand up to Donald Trump after all this, then can you be sure he’ll stand up for you when it counts against powerful interests?”

In Philadelphia, after McGinty was one of the Democrats to introduce her, Clinton again hit Toomey.

“Now, let me say this about Katie because that’s the person that I hope you will get behind in this election. She will work hard for you,” Clinton pledged. “She will help to break through the gridlock and get results for you. And she’s running against someone who refuses to stand up to Donald Trump. Think about it. Pat Toomey heard Donald Trump insult a grieving Gold Star family who lost their son in Iraq. He heard Donald Trump call Mexican immigrants rapists and criminals. He heard Donald Trump insult African Americans, POWs. He heard him engage in saying terrible things about women. He saw him spreading the lie that President Obama was not born in the United States. How much does he have to hear or to see? If he doesn’t have the courage to stand up against Donald Trump after all of this, then how will he stand up to special interests and powerful forces that are going to be trying to have their way in Washington? So it’s important that all of you do everything you can in these last 17 days to make the case to send Katie McGinty to Washington.”

McGinty has already received help from President Obama and Bernie Sanders as well as having Vice President Biden cut an ad for her.

“Today is just further proof that hyper-partisan, ethically challenged Katie McGinty will be a rubber stamp for everything Hillary Clinton wants to do in Washington,” Toomey Campaign Spokesman Pat Toomey responded. “Pat Toomey has been, and will continue to be, an independent leader in the Senate on issues ranging from gun safety to ending Wall Street bailouts.”