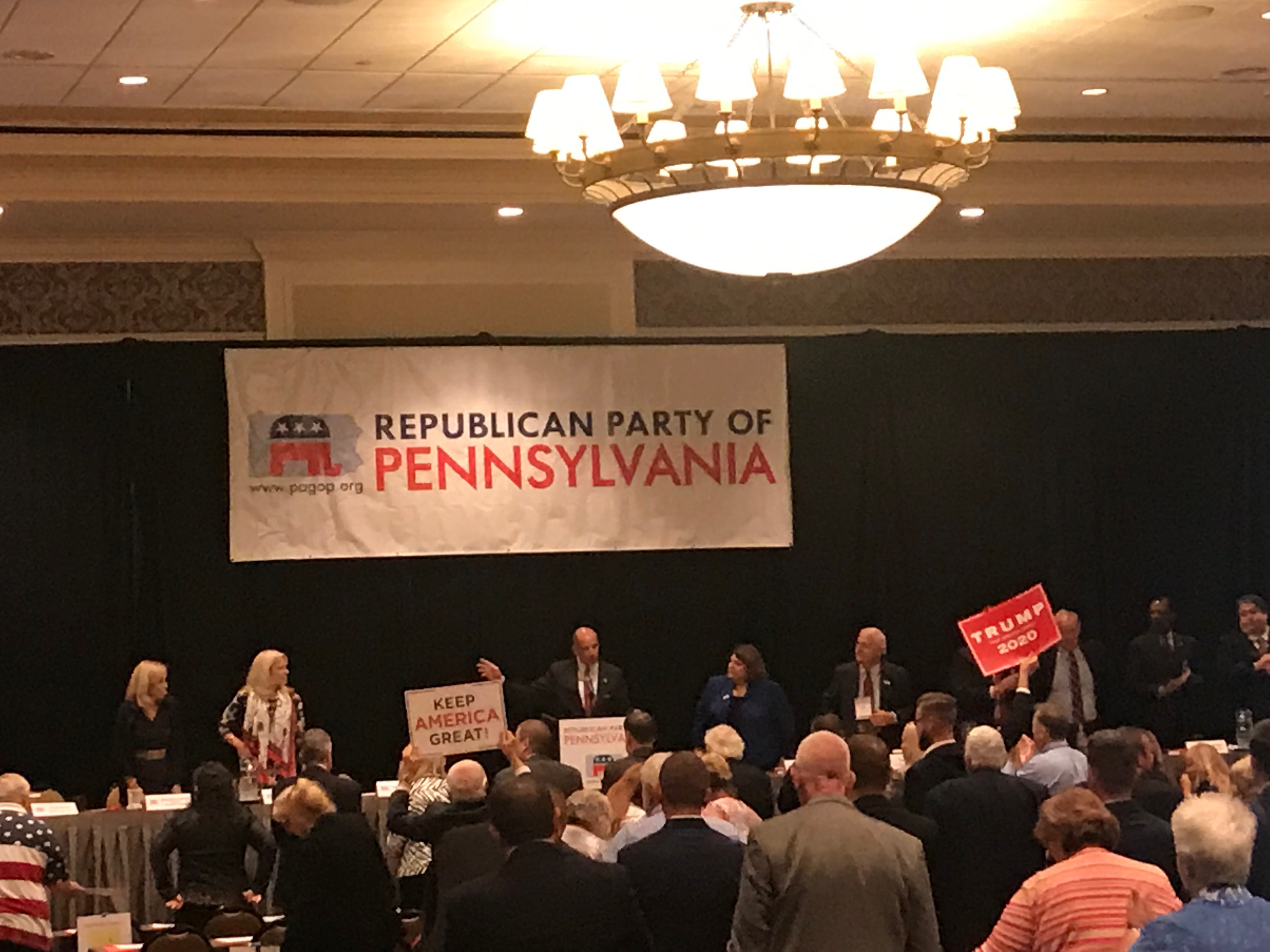 HERSHEY- Pennsylvania was a key factor in helping put Donald Trump in the White House in 2016. At the Pennsylvania Republican Party’s fall meeting, they touted his agenda and delivered their official endorsement for his 2020 campaign in hopes of keeping him in office for four more years.

“The president has restored a national spirit of optimism and a belief that our nation and its future is bright,” PAGOP Chairman Lawrenence Tabas said. “He has given us a reason to be proud and confident again.”

During Tabas’s first state committee meeting since being elected Chair in July, he lauded the Trump administration for “keeping promises” and painted a picture of a “hopeful” country due to his three years in the Oval Office thus far.

“He has successfully rebuilt our economy, created millions of new jobs, many of them here in Pennsylvania, strengthened our national security, rolled back many overreaching and unfair government regulations, which limit our individual rights and take hard earned money out of all of our pockets,” Tabas said at the Hershey Lodge on Saturday morning. “However, as great as his accomplishments are, the president has given us something far more valuable. For the first time in a very long time, we have a reason to be hopeful again.”

The Trump reelection effort has ramped up in recent months to keep Pennsylvania in the win column. Trump spoke at a Beaver County ethane cracker plant last month touting his economic policies, while he boasted about his trade and border policies in a rally in Montoursville boosting the candidacy of now Congressman Fred Keller (R-Snyder) the day before the Pennsylvania primary. Vice President Mike Pence headlined a state GOP dinner in June echoing Trump’s message and promoted the USMCA trade proposal, aimed at replacing NAFTA, in a visit to Franklin County last month.

Numerous Trump allies even interjected themselves in the recent race for PAGOP Chair, offering support for Vice Chair Bernie Comfort’s bid for the role. Comfort, who was given the role of Trump 2020 PA Campaign Chair, was the second to make the Trump endorsement nomination for the PAGOP after Tabas on Saturday morning.

“I agree with you Mr. Chairman, President Trump’s leadership and policies have produced real results that are making a difference in the lives of every American,” Comfort said. “These results make America great again.”

Comfort also highlighted Trump’s economic policies as proof that he deserves a second term and also added her belief that his administration has empowered women as well.

“As a member of the Women for Trump national advisory board… it is not lost on me how this administration and our president has promoted and empowered women,” Comfort said. “President Trump has appointed record numbers of women to senior positions and his policies have helped women advance financially.”

Other words of support for the state party endorsing Trump came from Lancaster County Committeeman Bryant Glick, who also seconded the nomination, by thanking Trump for his tax reform bill and called himself the “Democratic Party’s worst nightmare” since he said he is a “god fearing, gun carrying, pro-life conservative young latino with a job” who supports Trump. Trump 2020 Campaign Manager Brad Parscale provided words of thanks to the PAGOP for their endorsement of Trump through a prerecorded video, pushing the importance of passing Trump’s proposed trade deals that he said will help Pennsylvanians and called the upcoming election a “fight for freedom.” 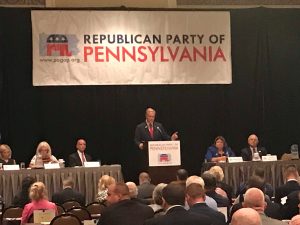 Pennsylvania’s newest member of Congress, Fred Keller, provided the Congressional report to the state party meeting. He said that despite the Democrats having control of the House, he believes the GOP members of Pennsylvania’s Congressional delegation are making progress in advancing Trump’s agenda, and said he was optimistic that the USMCA would be passed in October.

The Republican Party lost their majority of the U.S. House in the 2018 election and also lost seats in Pennsylvania, partly due to the newly drawn Congressional maps, but Keller said he believes that winning back the House in 2020 was attainable. He pointed to the GOP being 3-0 in Congressional special elections this year, although all three districts supported Trump in 2016.

Keller also offered words of criticism to those who don’t support the president by saying they don’t understand him.

Turzai’s fifteen minute plus address touched on a wide variety of topics that ultimately led back to crediting the GOP majority in the state House for different accomplishments and fighting off raising taxes.

“Throughout the past 8 years that we’ve been in the majority, many of our colleagues and the Governor on the other side, have pushed to propose new taxes, increase tax rates, and otherwise enlarge Pennsylvania’s government… we heard that from some Republicans by the way,” Turzai said. “We have consistently rejected those calls in the House of Representatives and insisted upon this pro-growth, pro-jobs agenda that would allow us to increase revenue through increased economic activity, not through tax increases.” 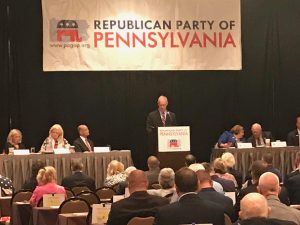 Turzai spoke with particular emphasis while advocating for “school choice” programs, which was a hot topic of conversation recently after Secretary of Education Betsy Devos visited Harrisburg Catholic Elementary School along with Turzai to promote these programs. Turzai’s exchange during DeVos’s visit over school funding with protesters outside of Harrisburg Catholic Elementary School made news when he referred to those opposing “school choice” programs as “special interests people” who “don’t really care about the kids.”

Turzai credited the GOP led legislature for the increase in funding public education, although a spokesperson for Wolf’s administration said the credit for increased public education funding should go towards the Governor, in a statement to the Pennsylvania Capital-Star.

Martin spoke for just over 6 minutes on his belief that turnout will be increased from both sides heading into 2020 and that maintaining their majority in the state Senate was critical. He said the Democratic Party believes that they can flip the state Senate by targeting Dan Laughlin (R-Erie), Tom Killion (R-Delaware), John DiSanto (R-Dauphin), and his seat.

Martin described the GOP majority as “the wall” that has prevented proposed tax increases.

“Remember Governor Wolf’s first budget,” Martin asked committee members. “The most massive tax increases and spending increases in Pennsylvania history. And who was the wall that kept that from happening? Your Pennsylvania legislature.”

Martin also addressed the recent resignation of state Sen. Mike Folmer (R-Lebanon) after he was charged with possession of child pornography. He described the details of the charges as “heinous” and “despicable,” while also accusing the PA Democratic Party for attempting to “fundraise off tragedy” prior to a special election to replace Folmer.

Various speakers throughout the morning also trumpeted the need for conservatives on the bench and pushed Megan King and Christylee Peck’s bid for the Superior Court in November.

The Saturday morning gathering also made official numerous new appointments to the state GOP from Tabas. The Fall Dinner on Friday night was headlined by HUD Secretary Ben Carson, which was not open to the press.