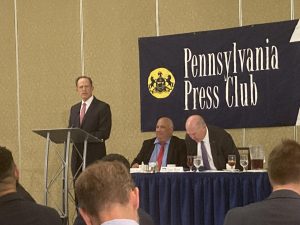 “Whatever happened to the guy who ran for president as the great unifier,” Toomey asked. “I’ve known Joe Biden for a long time, and not very well, we’re not close friends, but I’ve known him.”

Toomey said that he thought Biden ran a smart campaign and even added that his inaugural address was “terrific,” but believes he’s now aiming to model his presidency after two Democratic presidents from the 20th Century.

“I think it’s pretty clear that there’s been a conscious decision that Joe Biden wants to go down as one of the great liberal, progressives who has transformed the country in the tradition of FDR and LBJ,” Toomey said.

“It seems to me what’s animating the Biden agenda is to have the federal government provide the needs of the middle class,” Toomey said. “Just completely divorce any sense of personal responsibility and simply have a government program for every need, virtually every need, that a middle class person would need.”

The specific examples that the Biden administration is championing that Toomey railed against included the “massive expansion” of child tax credits, free child care, free universal pre-K, free community college, Obamacare eligibility regardless of income, paid leave, For the People Act, and more.

Toomey also blasted the effort from some Democrats to eliminate the filibuster, which has emerged as a key talking point in the Democratic primary race to succeed him in 2022.

Despite the issues Toomey laid out with the Biden administration, he did express optimism over one specific matter. Infrastructure.

“I think there’s a better than even chance that something gets done in this space,” Toomey said, about a potential bipartisan infrastructure deal. “When you have 11 Republicans on board with 10/11 Democrats, that’s a significant sign that this could pass the Senate.”

Toomey said that the “criteria” that the bipartisan proposal would have to meet for him to support it includes the bill addressing “physical infrastructure,” not undoing the 2017 GOP backed tax reform bill, and not running up the deficit.

Following his address, Toomey told a gaggle of reporters that he hasn’t made a final decision yet and is waiting for the details to be hammered out, but reiterated he’d be a “no” on the bill if it includes an increase on taxes and undoes the tax reform bill passed under former President Donald Trump.

In October 2020, Toomey announced that he wasn’t going to seek another term in the U.S. Senate or run for Governor in 2022.

While his time is winding down in elected office, he still plans on helping elect Republican candidates.

Toomey, who has $1.46 million in his campaign account as of his 2021 April filing, said he plans to help “good candidates win elections” and wants to see Republicans take back the U.S. Senate and the House in 2022, although he warned against blind loyalty to Trump, as the former President is taking in active role in campaigning leading up to the 2022 election.

“I do think it’s important to win elections, especially in competitive districts in competitive states, candidates will have to run on ideas and principles, not on allegiance to a man,” Toomey said.

As the GOP race is beginning to shape up to succeed him, Toomey hasn’t weighed in on the primary and said he’s not sure if he will yet, although he expressed optimism that a “strong candidate” will emerge from the primary and the GOP will be able to hold the seat.

Despite Toomey’s optimism on keeping the seat in Republican’s hands, several national ratings outlets indicate that the race is up for grabs in 2022.

At the end of the event, it was announced that Auditor General Tim DeFoor will participate in the next PA Press Club luncheon on July 26.