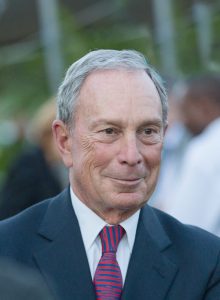 In what the AP is describing as an “aggressive move in a late primary state” Michael Bloomberg has announced the hiring of several state senior directors for his campaign effort in Pennsylvania.

First reported by the Philadelphia Inquirer on Wednesday, the former New York City Mayor has brought on about 35 staffers and intends to hire more than 90 staffers and open a dozen offices, according to the campaign’s newly announced state director, Kevin Kinross.

“Mike Bloomberg has taken on and won on some of our country’s toughest fights and our effort to defeat Donald Trump in Pennsylvania and across the country will be no different,” Kinross said in a release. “Pennsylvania is a critical state. I’m eager to start building an organization that will not only help us win on April 28, but also in November.”

Kinross, CEO of the Carey Group, was the campaign manager for former Philadelphia Mayor Michael Nutter’s 2011 successful reelection bid, campaign manager for Dan Onorato’s unsuccessful 2010 gubernatorial run, while also serving in significant roles for both Hillary Clinton and Barack Obama in Pennsylvania during the 2008 election. In December, Nutter was announced as the campaign’s national political chair.

In addition to Kinross, the Bloomberg campaign has hired a slew of other directors to senior positions in the state.

The campaign also boasted about hiring “over 12 Regional Organizing Directors” that are trained to talk to Pennsylvanians about Bloomberg’s record on climate, gun control, and how they believe he is the Democratic candidate most likely to defeat President Donald Trump in Pennsylvania.

While Bloomberg already kicked off his campaign in the state last month by addressing a crowd in Philadelphia opening his first field office in the state, he is not the only Democrat already making an effort at securing the keystone state.

Bloomberg’s largest endorsement to date in Pennsylvania is Nutter, although the New York Post reported in late December that his campaign was “angling for a key endorsement from Pittsburgh Mayor Bill Peduto.” Peduto has yet to endorse a candidate for president.

Although Bloomberg has supported a number of Democrats in the state throughout the years, he has also been criticized for his gun-control group endorsing Sen. Pat Toomey (R) in 2016 and Rep. Brian Fitzpatrick (R-Bucks) in 2018.

While the push for support in Pennsylvania from the Bloomberg campaign seems to be in it’s earliest stages, he is the Democratic candidate who has already significantly outspent his opponents in television ads in the state. The Philadelphia Inquirer reports that Bloomberg has already spent $6.6 million on TV in Pennsylvania, according to FiveThirtyEight. The next closest candidate in television ad spending in the state is President Donald Trump at $470,000 and Democrat Tom Steyer at $75,000.

The Real Clear Politics average shows Biden maintaining his lead in the Democratic primary field in Pennsylvania. The most recent update from September 30-October 27 showed Biden holding 25% in the state’s primary, while Sen. Elizabeth Warren (D-MA) carried 14.3%, Sen. Bernie Sanders with 10.7%, and Buttigieg with 6.7%. Bloomberg was not included in these polls due to his late entrance into the race in late November.

The Real Clear Politics average shows Trump trailing Biden, Warren, and Sen. Bernie Sanders in the state in a hypothetical head to head matchup, although the most recent Pennsylvania poll from the Morning Call/Muhlenberg College released in mid November showed that his deficit with Sanders and Warren was within the margin of error.

Bloomberg has not been included in these Pennsylvania specific polls included from Real Clear Politics, although a poll released from FireHouse Strategies on Dec 8 showed that Trump was leading all of the highest polling Democrats in the state, but the one within the closest margin to Trump was Bloomberg, only trailing by 4 points, while the largest deficit was Sanders trailing Trump by 10 points. However, Firehouse Strategies is a public affairs firm founded by 3 senior aides on Marco Rubio’s 2016 presidential campaign.

This story was updated to note that Bloomberg has also supported Republicans in Pennsylvania in the past.