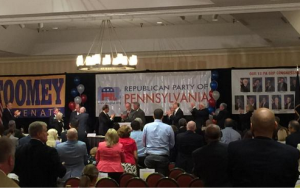 The Pennsylvania Republican Party’s leadership met in Harrisburg this weekend to prepare for the 2015 judicial elections and with an eye on the 2016 elections.

It was a morning of unity, both real and purported.

All Republican members of the legislature were honored with large banners on both sides of the lectern. The 13 GOP Congressmen each had their portrait displayed on the along the room’s corridor, a physical manifestation of the party’s dominance in the U.S. House.

Conversely, the sixteen portraits along the hallway outside represented the chaotic presidential 2016 primary contest. In fact there wasn’t even enough room, so Rick Santorum’s photo had to be set up on the left side of the hallway (an act he likely would disapprove of). Additionally, John Kasich’s portrait had a campaign sticker on it, suggesting that someone was worried that without it no one would recognize who he was.

The party officially endorsed Sen. Pat Toomey’s re-election by unanimous voice vote. The Senator was in attendance and gave a short acceptance speech that touched on his announcement address last week.

“We are together, we are united and we’re going to do our part to make sure this century is another American century,” Sen. Toomey concluded.

The event built to the showcase of the party’s five judicial candidates for the fall, three for State Supreme Court, one for Superior Court and another for Commonwealth Court.

All five spoke but Supreme Court candidate Judy Olson gave the most passionate speech, calling this November “the single most critical election of the last 20 years in Pennsylvania.” She described the fall’s effort as a “Drive for Five”.

There is only one schism in the party at the moment but you might not have noticed it if you weren’t aware (although the crowd of party insiders was undoubtedly aware).

That is the race for the Republican nomination in next year’s Attorney General race between State Sen. John Rafferty and State Rep. Todd Stephens. As luck would have it, both were chosen to given the official reports on their respective caucuses (they also both recently won the support of their body’s leaders).

As a result, the two men spoke back-to-back just seven months removed from their primary contest. Due to the setting, however, neither one could take a shot at the other or even really refer to the competition.

Rafferty took the podium first, portraying Governor Tom Wolf as the dam holding up the budget process. He also critiqued the Governor’s new plan to privatize the liquor industry, mentioning how opposed Democrats were to privatizing the state’s lottery system.

The State Senator criticized Wolf for the mailers that were sent out by the Governor, saying that Wolf “threw hand-grenades in my district”. Despite that effort, Rafferty said he had received a clear message from his constituents.

He also stated that the “Governor has taken a page out of Barack Obama’s playbook” by imposing a death penalty moratorium and bypassing the other branches of government.

Stephens denounced the Governor as well as on his budget proposals and tax plans. He noted that the state’s unemployment rate had dropped from 8.2% to 5.4% since the GOP took over the State House. Nevertheless, he asserted, “to this Governor, the facts don’t get in the way of a good story.”

The State Rep. went on to criticize Wolf for opposing the stopgap funding measures currently being pushed by the party. He particularly pointed to the rape and domestic violence crisis centers that will be closed as a result of the shutdown (this point echoes a recent video from his campaign that recalled Stephens’ work for a victim of domestic violence).

Overall, both candidates praised the judicial nominees and steered clear of next year’s contest. The closest either came to any campaign statement was when Stephens noted that he “spent a career in the courtroom before coming to the State House.”

They both name-dropped the other several times in their speeches, with Rafferty mentioning “Todd” and Stephens “Sen. Rafferty”.

On the surface, they were both on the same page. It’s unclear how long that will last.