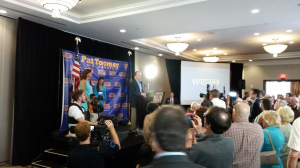 Sen. Pat Toomey has made a conscious effort to be as different as possible from the last GOP Senator to represent Pennsylvania, Rick Santorum.

Whereas Santorum proudly wore the label of social warrior, Toomey wants to convince Pennsylvanians that he is a non-partisan problem solver.

Yesterday’s event was built around that theme as several speakers, including FOP President John McNesby and Wawa CEO Chris Gheysens, provided their own testimonials as to the Senator’s skill as a legislator.

The campaign even unveiled a new video to emphasize all these points, which they played right before Toomey spoke.

Altogether, about half of the event was devoted to speakers other than Pat Toomey.

The approximately fifteen minute address began with some of his accomplishments and even mentioned his Democratic colleague Bob Casey.

“And I will say I also work closely with Senator Casey whenever I can,” Toomey stated. “And one of the areas we work closely together regularly is filling vacancies on the federal bench. The fact is in the four and a half or so years since I have been in the Senate we have been able to recruit, vet, nominate, and confirm, fifteen men and women to the federal bench across the Commonwealth of Pennsylvania. And, in that period of time, only California and New York can match or exceed those numbers.”

“I’ve consistently stood up and stood for the police who are being unfairly maligned and scapegoating,” he said of an issue that he has been particularly focused on lately. “You know the fact is that police are not causing the crime wave that’s hitting America, they are protecting us from it.”

Still, his speech wasn’t without its attacks on President Obama.

He criticized the Administration’s efforts towards renewable energy and devoted the most time to the Iranian nuclear deal, which he has taken a leading role in opposing.

“In my view this is a shockingly terrible and dangerous deal. It rewards a rogue regime with many billions of dollars virtually upfront,” Sen. Toomey asserted. “It legitimizes a nuclear program that I fear will lead to the production of nuclear weapons and it undermines the security of our allies and the United States. You know, the President may have succeeded for the moment in circumventing Congress and the American people on this terrible deal but I’m to tell you that this is not over. I am not going to give up the fight against this deal.”

Toomey finished by quoting historian David McCullough and his belief that “there is no such thing as history”. Therefore, nothing is preordained and the people the Senator believes are predicting America’s decline are wrong.

Nowhere in his speech did Toomey mention any of his Democratic opponents (Joe Sestak, Katie McGinty and the wildcard newcomer John Fetterman) and it’s unlikely that he will until after the April 22nd primary.

After he finished, the Senator hung around the ballroom and mingled with his crowd of supporters. Congressman Meehan and AG candidate Todd Stephens (fresh off some big endorsements) were also there meeting with some of the Senator’s strongest reporters.

Sen. Toomey even posed for the cameras in the hallway outside with a baby in hand, clearly enjoying the calm before next year’s storm.