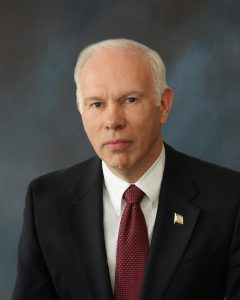 Dr. Davis Haire, Wyoming County GOP Chair and Optometrist, announced his candidacy for the Republican nomination for the special election in the 12th House District.

Rep. Tom Marino (R-Lycoming) announced he was resigning from Congress last month to take a job in the private sector, but told the Daily Item a couple of weeks ago that health issues prompted his resignation.

In a press release announcing his bid, Haire touted his record in the private sector, while emphasizing the need for the newly elected Congressional representative to be a “strong, reliable partner” to President Donald Trump.

“As someone who has spent four decades in the private sector, I am running because I want to help preserve our country’s promise for the next generation,” Haire said in a statement. “To do so, we need a Congressman from this district who will be a strong, reliable partner of the President and can help change the culture of Washington, D.C.”

Haire was recognized by former Gov. Tom Corbett as a leader in his field and was appointed to the State Board of Optometry, where he served as a board member and a term as Vice Chairman. He took a brief break from this board, but was reappointed by Gov. Tom Wolf. He uses his experience on this board plus he decades in the private sector in the field as a benefit to handling what he describes as “today’s healthcare crisis.”

Haire was a candidate in the GOP primary for the 117th House District in 2014, but was bested by Karen Boback, who would win the seat in the general election and still represents the district that covers parts of Luzerne, Lackawanna, and Wyoming County.

His press release included a number of endorsements from a host of Wyoming County officials such as state Rep. Karen Boback, County Commissioner Tom Henry, and more.

“I am proud to receive the endorsement of several local elected officials, who share my vision to support the President, promote economic growth, and change the culture of Washington,” Haire said in a release.

The Lewistown Sentinel reports that on Tuesday evening, a number of potential candidates addressed a meeting of the Mifflin County Republican Committee, which also included the following possible candidates: Pat Miller, of Centre County, Chris Hoffman, of Juniata County, Malcolm Derk, of Snyder County, Joseph Moralez, of Northumberland County, Joe Peters, of Wyoming County, Robert Noerr, of Clarion County, Maria Montero, of Lycoming County, and Kevin Ferrera, of Clinton County in addition to a number of the candidates named above.

Earlier this month, the Pennsylvania Democratic Party officially nominated Marc Friedenberg as their candidate. Friedenberg, an assistant teaching professor at Penn State, where he teaches cybersecurity and cyber-law courses, was the Democratic candidate in November against Marino.

The Republican Party will select their nominee for the seat this Saturday in Williamsport.