PA-Sen: Toomey Makes the Cover of the National Review 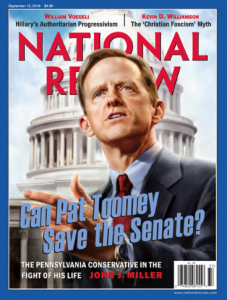 “We’re in the battle of our lifetimes,” Senator Pat Toomey told a crowd in Lewisburg.

It’s a clever statement, an attempt to couple his electoral needs with the desires and fears of his audience. That’s because, as the cover story in the National Review from John J. Miller makes clear, Sen. Toomey is in “the fight of his life”.

“Can Pat Toomey Save the Senate?” the cover of the Review asks.

They’re referring to Toomey’s ability to win re-election in a state where Donald Trump (no favorite of the Review’s) is running behind. In fact, although the last six surveys show Trump trailing Hillary Clinton in PA, Toomey performs better than The Donald in all of them.

The problem, though, is that he was still trailing his Democratic opponent Katie McGinty in five out of the six.

Despite the drag that the top of the ticket appears to be having on his own chances, however, Toomey can’t denounce Trump. Miller, and other reporters, have found that conservatives bring up the Senator’s reluctance to fully support the party’s presidential nominee everywhere he goes.

Trump’s ascendancy has shown a bright light on just how difficult it is for a Republican to appeal to moderates in the Southeast and still please their base. No GOP official can win a statewide race in PA without maintaining that balance.

Miller also mentioned how Toomey was once an insurgent himself, challenging Arlen Specter in the 2004 GOP primary. In 2008, he wrote an editorial for the Wall Street Journal titled “In Defense of RINO Hunting” about the Club for Growth’s efforts to primary various liberal Republicans (Toomey was the President of the Club for Growth at the time).

“Republicans would be better off, the argument goes, if the Club PAC spent its money targeting Democrats instead of liberal Republicans. This is the argument of politicians who care more about maintaining power than using that power to implement conservative policies,” Toomey wrote. ”Winning for the sake of winning is an excellent short-term tactic, but a lousy long-term strategy.”

Toomey concluded by arguing that the 2006 midterms were the result of a failed GOP strategy which must be changed for the sake of the party.

“Otherwise, it can look forward to a bad case of deja vu.”